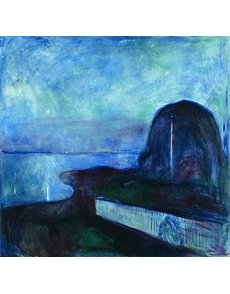 The sea is a running theme in Norway’s art as seen in Norwegian artist’s Edvard Munch’s 1893 painting Starry Night.

The Norges Bank, or Bank of Norway, is preparing to launch a design competition for a new series of paper money.

Bank officials recently selected “The Sea” as the design theme for the notes.

The competition will be run in two stages; first the bank will hold a pre-qualification competition and then hold a final competition among five to eight participants to select the winning design, according to the bank Dec. 2.

The design theme reflects the sea’s “importance for Norway’s business sector and economic prosperity,” according to the news release. The theme will be reflected on the face and the back of the notes, and will break with the tradition of using portraits.

“We have chosen a theme we consider to be original and particularly relevant for Norway, which is a small country but a major coastal nation. Norway has a total coastline of [83,000 kilometers], the longest in Europe. The use of marine resources, combined with the use of the sea as a transport artery, has been crucial to the development of Norway’s economy and society,” Trond Eklund, director of Norges Bank’s Cashier’s Department said.

Bank officials have been planning the new bank note series since the fall of 2012. This will be the eighth series of kroner notes. According to the news release, a need exists to enhance bank note security to ensure that current and future Norwegian bank notes are resistant to counterfeiting.

No date was given for the notes’ release, but officials said “developing a new banknote series is a complicated and demanding project that will extend over several years.” ¦