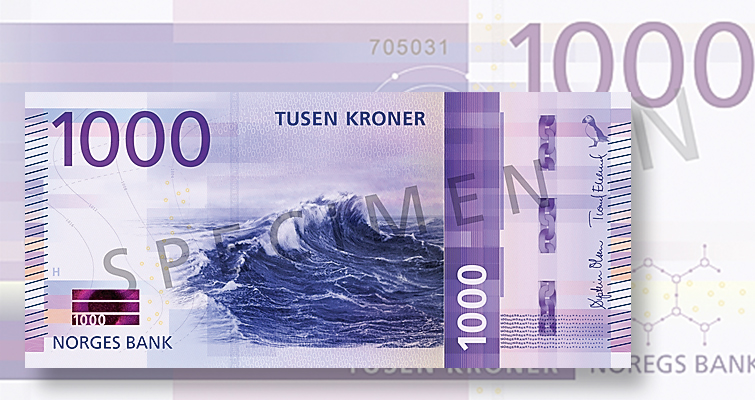 Norges Bank will complete its new eighth series of bank notes when it releases the 1,000-krone note in Bergen on Nov. 14. 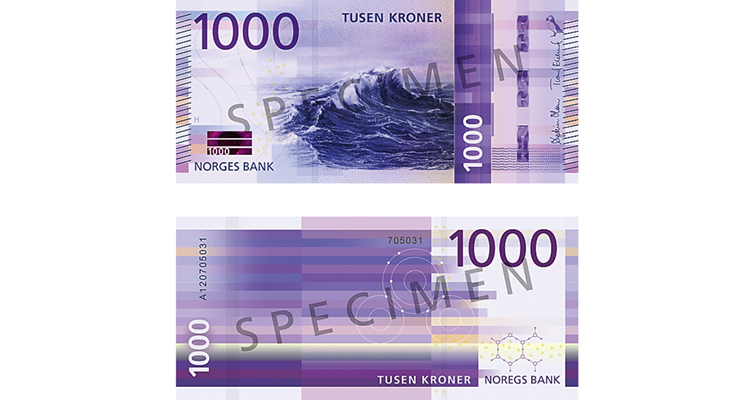 The 1,000-krone note’s face motif is a wave in the open sea; a puffin is in the upper-right corner. An increasingly dense pattern of rectangles on the back sybolizes water under gale-force winds, and “Noregs Bank” on the back is an official nod to the New Norwegian dialects.

The note retains the purple color of its predecessor, and as the other new notes, does not feature a human portrait, but an easy to recognize primary motif on the face and an abstraction of sea and wind on the back.

The 1,000-krone note’s motif is a wave in the open sea, meant to suggest the sea as a “counterforce that hones us, and a driving force that carries us forward.”

The bank explains that for more than 1,000 years the sea has been the basis of Norway’s wealth, contact with the rest of the world and optimism for the future. While new industries and technologies have provided for advancement, climate change and loss of biodiversity are problems that must be solved. The design’s message is meant to spur further commitments to maritime and marine research in the future as a step towards sustainable development.

An Atlantic puffin is in the upper-right corner of the note. The head of a puffin and the face value are in the watermark used on all denominations.

The back is described as a pattern in which “the open sea vaguely appears on the horizon. There is a strong gale and the rectangular forms are longer than on the 500-krone note. The waves pile up in the organic pattern.” A pair of water molecules in both liquid and solid states are also shown.

A close look at the note shows “Norges Bank” printed on the face and “Noregs Bank” on the back.

Gunner Thesen of Oslo Myntgalleri explains, “In Norway we have two different ways of talking and writing Norwegian. One is regular Norwegian and one is ‘New’ Norwegian, a mixture of dialects. In ‘New’ Norwegian the country is called Noreg. In official documents issued by the state a certain amount has to be made in New Norwegian, although only about 10% of the population speaks it.”

The bank notes were printed in France by Oberthur Fiduciaire. 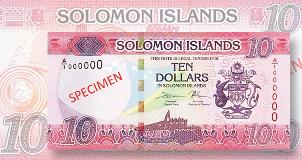 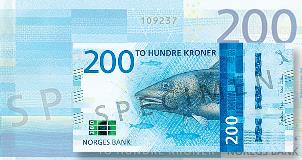 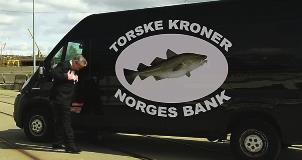