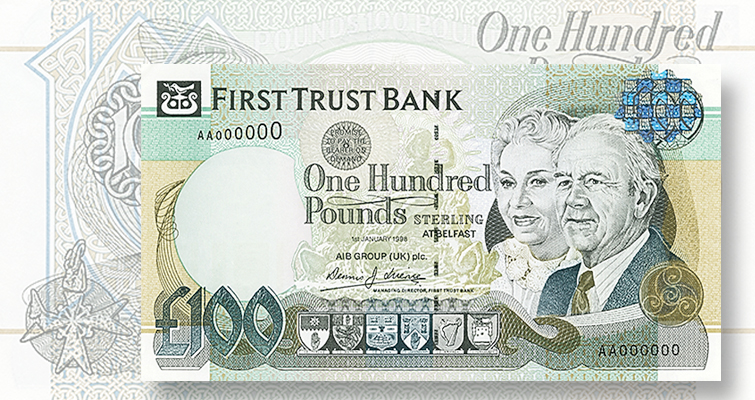 The First Trust Bank in Northern Ireland will cease issuing bank notes, including this £100 issue. 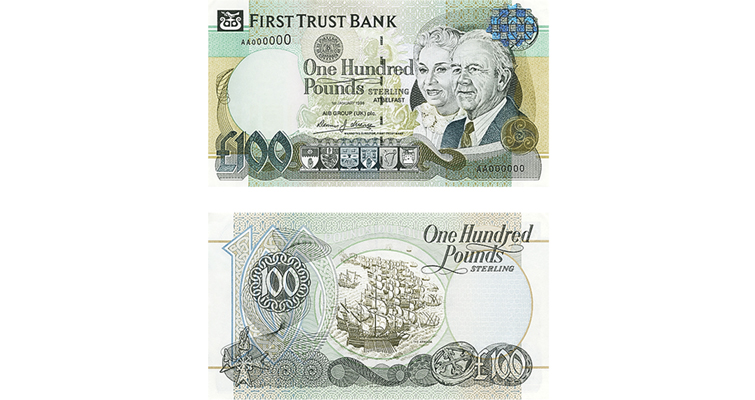 The face designs of the soon to be discontinued series portray Northern Irish people, with two seniors together on the £100 note. The backs relate to the Battle of Spanish Armada between England and Spain, in 1588

Since 1929, banks have issued bank notes for use in Northern Ireland. As with the similar notes issued by banks in Scotland, they are legal currency in the United Kingdom, backed by deposits in the Bank of England, but they are not officially legal tender.

A jolt was delivered to the 90-year-old system on Feb. 12 with the announcement that First Trust Bank, one of the four Irish issuers, would cease printing its own notes and that the notes will lose their legal currency status on June 30, 2022. The bank’s ATMs will switch to emitting notes from the Bank of England.

Currency issued by First Trust comprises around 11 percent of all notes in circulation in the Northern Ireland. Current First Trust notes include a £100 note first issued in 1998, and£10, £20, and £50 denominations.

The face designs of the soon to be discontinued series portray Northern Irish people, with a middle-aged man on the £10 note, an older woman on the £20 note, an older man on the £50 note, and the two seniors together on the £100 note. The backs relate to the Battle of Spanish Armada between England and Spain, in which 24 ships were wrecked off the Irish coast in 1588.

The bank is a subsidiary of Allied Irish Banks. It said the move was a “commercial decision” and that it will establish an exchange service at post offices for redemptions until June 30, 2024. Retail Bank International was told the decision was one “that takes into account the increasing use of digital payment methods and mobile technology.” Allied Irish Banks is near the top of banks in the UK and Ireland in increasing its number of digital customers. It said that at the end of 2018, of its 1.3 million retail customers, almost 65 percent were digitally active.

Allied Irish Banks did not say that another result of (and possibly a reason for) its decision would be a bonanza for its working capital position. The Sunday Times pointed out that First Trust is due back from the Bank of England deposits of about £300 million, or $386,882,100.

The three other banks will continue issuing notes, and are now making a changeover to polymer. They are Bank of Ireland, Danske Bank (formerly Northern Bank), and Ulster Bank.