No, it's really not an error 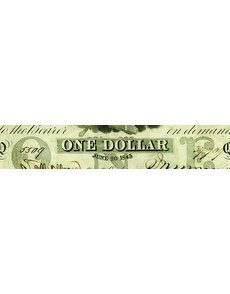 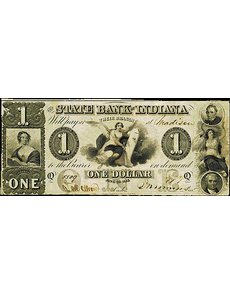 The extremely rare genuine $1 note from the Madison Branch of the State Bank of Indiana sports serial numbers 5509 and 37709. Most collectors would quickly say this is an error note. But not so, according to the serial number system devised by the state bank.

Paper money errors have always been popular with collectors. On obsolete notes, however, they are surprisingly few and far between.

The ones I see most often are so-called paper void printing errors where the sheet was folded prior to printing, leaving a blank area or void underneath the foldover.

One “error” that collectors, if unfamiliar with the workings of the note issuing process for the State Bank of Indiana (1834 to 1859), often seize upon is that of “mismatched” serial numbers on the notes.

Take for example the extremely rare genuine $1 note from the Madison Branch of the State Bank of Indiana illustrated above. The note sports serial numbers 5509 and 37709; obviously a blunder, right?

The State Bank of Indiana sent notes from the headquarters in Indianapolis to all of its branches across the state with some elements only half completed.

Completing the notes upon arrival was a security measure. If the notes were stolen in transit, the thieves would have only partially issued notes in their possession.

Likewise, counterfeiters would have to guess what the combination of serial numbers might be.

While this did little to help the public ascertain bad notes, it was effective when notes were turned in for redemption at the bank or any of its branches. While many counterfeits were poorly made, some were more deceptive. Checking the list of serial numbers is still an effective way to divine the genuine (and therefore extremely rare) examples from the far more common surviving fakes.

Of all the surviving State Bank of Indiana notes today, only 12 have been found to be genuine based upon their serial numbers. Noted researcher Robert W. Julian from Logansport, Ind., put together this list a from archived reports in the late 1960s. I am fortunate enough to have a copy of his findings and hope to eventually put them into publishable form for use by all collectors.

In the meantime, if you have a State Bank of Indiana branch note that you’re not sure about, send me an email, and I’ll look up the serial numbers for you.