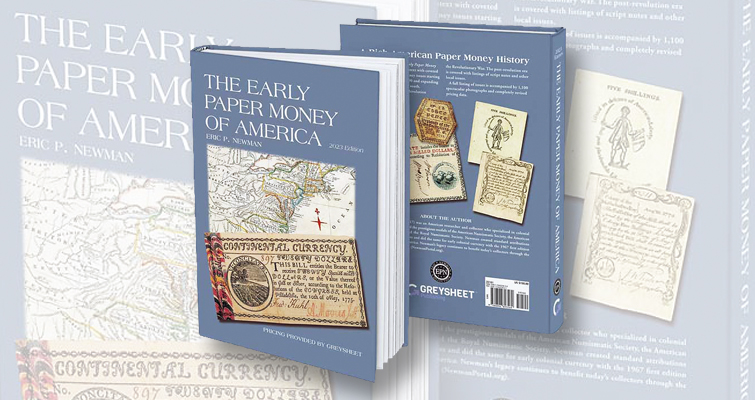 A new edition of Eric P. Newman’s “Early Paper Money of America,” the definitive reference on Colonial and Continental currency, the first circulating currencies of North America, has been published by CDN Publishing.

A new edition of Eric P. Newman’s Early Paper Money of America, the definitive reference on Colonial and Continental currency, the first circulating currencies of North America, is updated and published by CDN Publishing of Virginia Beach, Virginia.

This is the first new edition of the book, initially published in 1967, since 2008. At 472 pages, this edition features hundreds of full color images, replacing the black and white plates of earlier versions. Pricing was completely updated by CDN pricing editor, Patrick Ian Perez, a leading specialist for numismatic pricing.

Early Paper Money of America, or EPMOA as it is commonly known, is the seminal body of work on this important and historic numismatic subject. According to Perez, “There is simply no comparable work in existence that comes close to the decades-long efforts of Eric Newman. It has been an honor and a privilege to participate in bringing the much-needed 2023 edition to life.”

The reference covers the latest research in the field, which includes all of the thousands of known scrip pieces issued officially and privately by the English, French, and Spanish colonies, the Continental Congress, the original 13 colonies, and Vermont.

Other improvements include an improved typeface, overall design and updated cover. A digital edition of the book is available immediately at www.greysheet.com. Printed copies are available in hardcover only and were to start shipping in early September. The work is priced at $100 for the digital version and $150 for the hardcover version, or in combination priced at $200. Existing subscribers to Greysheet products will be offered a 20% discount. Visit www.greysheet.com for an online sample of the book and to place an order. Copies of the hardcover book will also be available from numismatic dealers nationwide.

Eric Newman was one of the leading numismatists of his generation, with a particular interest in early American numismatics. He also published references to the 1787 Fugio cents and “1776 Continental dollars,” among many other works of numismatic literature.

In a biography prepared by Heritage Auctions when it sold his massive collection in a series of auctions, the cataloger stated, “He is the foremost scholar on American Colonial paper money, and his The Early Paper Money of America (1967), is considered the definitive reference on the subject through multiple editions. His specialty is solving numismatic mysteries, as evidenced by his 1961 The Fantastic 1804 Dollar (with Ken Bressett). ... Newman has authored more than 100 articles for scholarly publication, including ‘The Secret of the Good Samaritan Shilling’ and ‘The Origin of the Written and Printed $ Sign.’ In honor of his many contributions to numismatics, and to recognize his 100th birthday, the American Numismatic Society dedicated a 2011 issue of their magazine to Newman’s ‘extraordinary achievements.’ They included a bibliographic listing of his published works, which ran over six pages.” 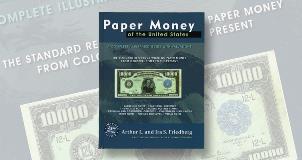 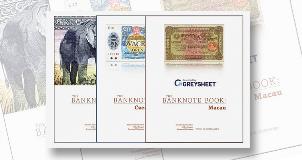 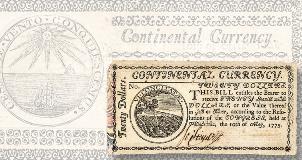