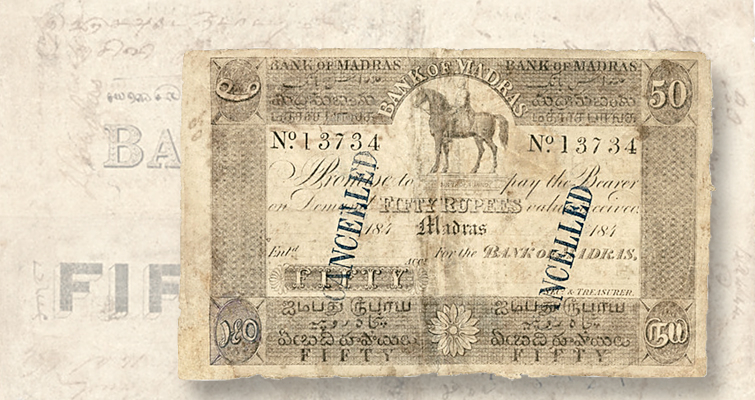 Five Indian issues from the Bank of Madras from the 1840s are expected to each bring a five-figure price. 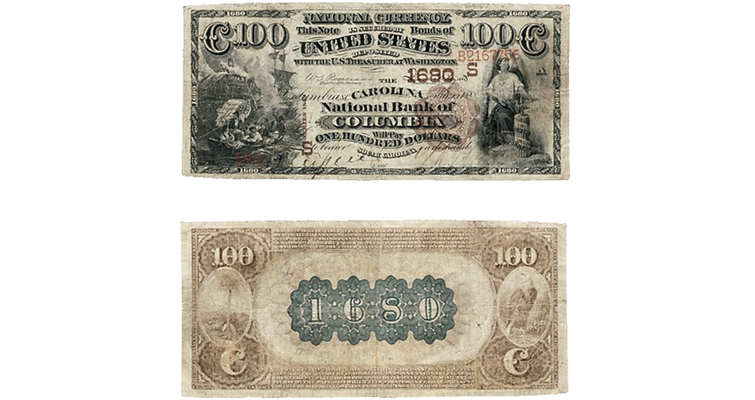 Although the 2020 edition of the International Paper Money Show in Kansas City had to be canceled, the Lyn Knight Auctions normally held at the show will go on as scheduled on June 11 and 12. The auction will consist of internet sessions hosted at www.lynknight.com.

The 600-lot United States currency session on June 12 is heavy with collectible small- and large-size type and national bank notes, including packs and errors.

Featured is a recently discovered and restored Series 1882 $100 Brown Back national bank note for the Carolina National Bank of Columbia (South Carolina), Friedberg 523, in Paper Money Guaranty Choice Fine 15. It is said that only three $100 South Carolina nationals have survived, and none of any denomination were issued after the Series 1882 $10 Date Back notes. It is expected to sell for a minimum of $15,000.

The premier large-size note, a F-259 Series 1886 $5 silver certificate with the back design of five silver dollars, bearing serial number #B10 and graded PCGS Currency Choice About New 58, checks all the boxes. It is the earliest printed $5 Silver Dollar back note to have survived in collector’s hands, it is called the third finest known, and it is one of the most popular of all United States paper currency types. It is estimated at $12,500 to $25,000.

World paper will be the subject of the 750-lot June 11 session, in which five Indian issues from the Bank of Madras from the 1840s are expected to each bring a five-figure price. The notes are denominated as 10, 20, 25, 50, and 100 rupees and are identical in design. Sir Thomas Munro, Governor of Madras from 1817 to 1827, is featured on horseback on the obverses, and the bank name and the value are on the back. These notes are rarely offered and they are hard to find in any condition. Three of them are graded Very Good by PMG, one is Very Good/Fine, and one is Fine.

“A Note on Bank of Madras Currency Notes” by Dr. Nilaish estimates that the Bank of Madras issued the smallest number of bank notes of the three presidency banks. The bank also printed 15-, 500-, 1,000-, and 3,000-rupee notes. Only 110,000 to 200,000 notes were issued for each denomination. Most of them were returned to the bank and destroyed.