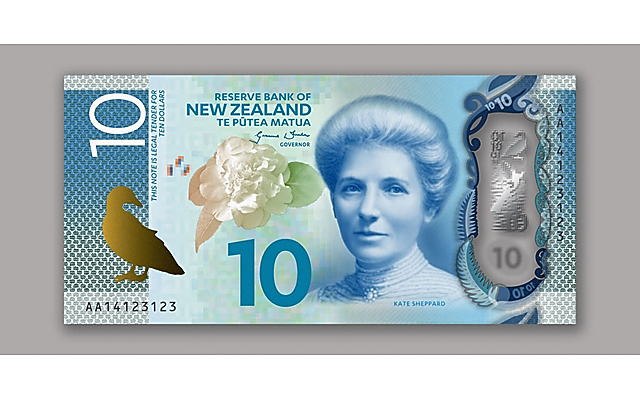 A portrait of Kate Sheppard appears on the face of the redesigned $10 notes of New Zealand.

Redesigned bank notes including more color to help combat counterfeiting will begin to be released into circulation in New Zealand in October 2015, according to the Reserve Bank of New Zealand.

The target date for release of the $5 and $10 notes is October 2015 with the remainder of the denominations to be released in April 2016.

The redesigns are for all denominations — $5, $10, $20, $50 and $100. The designs keep the same flora, fauna and people that appear on New Zealand’s current polymer bank notes but include more references to Maori culture, according to the bank.

The notes will remain the same size as current notes and will be printed by the Canadian Banknote Co., based in Ottawa, which has printed New Zealand’s passports since 2009, as well as Canada’s paper money.

According to the bank, the designs unveiled Nov. 20, 2014, “are artistic renditions of New Zealand’s new banknotes. The Reserve Bank is completing detailed work on the public and machine-readable security features, which will help people to authenticate the new notes. For this reason, the actual banknotes will look slightly different to the ones shown here.”