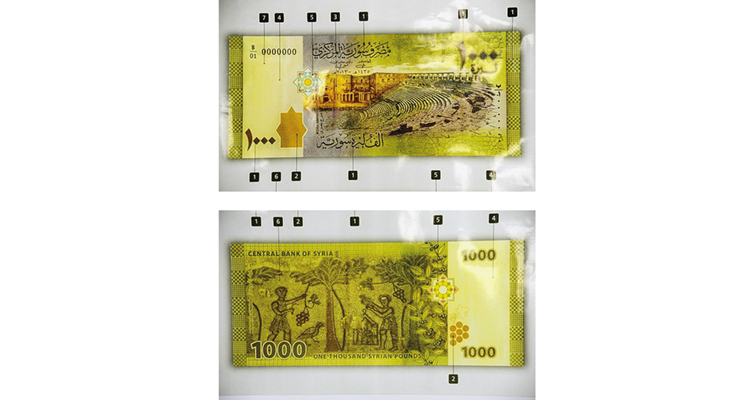 Images from the Central Bank of Syria

The introduction of the new 1,000-pound bank note in Syria in late June has not been without controversy.

The new issue may be taken as a tribute to Syria’s ancient cultural heritage, now being indiscriminately pillaged by friends and foes of the regime alike. Prominent on its face is the ancient Roman amphitheater in Bosra, a UNESCO World Heritage Site dating to the second century A.D., while the back has a rendition of the tile mosaic of a grape harvest found at the Roman ruins in As-Suwayda.

The controversy arises over what is missing, namely the central figure on its predecessor note, the image of President Bashar Assad’s father and the country’s former president, Hafez al-Assad.

The change has been the subject of vigorous debate since the note was issued by Syria’s Central Bank, an institution no one doubts is under the control of the Assad regime. The bank says its motivation was to show by printing new notes that the Syrian economy is capable of overcoming the difficulties it is facing, which are especially as a consequence of American and European sanctions on its currency. The new notes are said to possess better security devices and be printed on higher quality paper.

However, the Middle East news site Al Bawaba reports the real reason is that the note with Assad on it was the subject of a campaign by the opposition to write offensive things about him next to his image. Not only was this embarrassing to the government, it was also dangerous — notes that had insults written on them could lead to the arrest of individuals holding the notes.

The Syrian Observer reports that social media supportive of the Assad regime railed against the move for “daring to remove Assad’s image and ideology.” They called for a boycott of the new note while urging people to use the 500-pound note instead “until the SYP 1,000 banknote returns to its original look.” Another supporter wrote “This banknote does not represent me. I am a Syrian, I am against it.”