New Orleans scrip and the 'enemy at the gates' in 1862 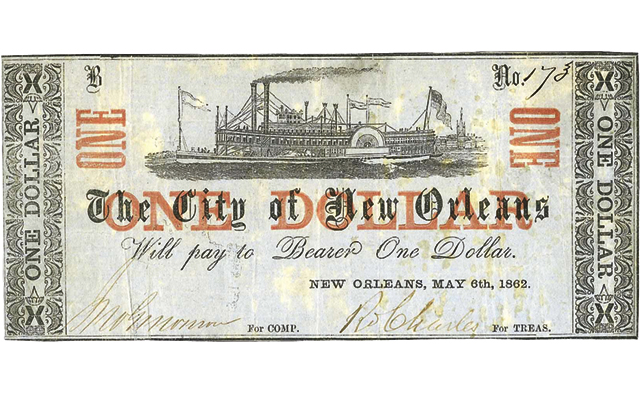 The City of New Orleans issued this $1 note dated May 6, 1862, for the redemption of scrip issues from a list of "approved" issuers. 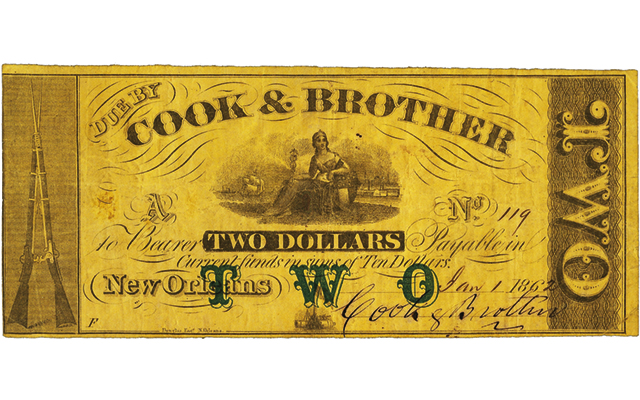 Uniface $2 note was issued by Cook & Brother in New Orleans on Jan. 1, 1862. The company was the largest private manufacturer of small rifles and carbines for the Confederate troops. After the fall of the city, the firm relocated to Atlanta.

In April 1862, citizens of New Orleans knew danger was at the door. By the end of that month Union naval forces had captured New Orleans, the largest city in the Confederate States of America.

With the “enemy at the gates,” literally, officials had to figure out a plan to redeem scrip issues from more than 130 business and service providers in the city.

The fall of New Orleans and Civil War scrip issuers of that city from 1861 to 1862 were the focus of an educational presentation by Wendell Wolka June 13 during the 38th annual International Paper Money Show June 13 to 15 in Memphis, Tenn.

Wolka told the story of how the southernmost port on the Mississippi River, and a key financial and commercial hub for the Confederacy, was captured by Union Adm. David G. Farragut. Wolka said the Confederacy did not suspect an attack by Union troops from the Mississippi River. On April 24, Farragut and his troops made it past the last two outposts of CSA troops and arrived in New Orleans the following day.

Once the city was captured, decisions had to be made about which scrip issues would be accepted and which would not. These privately issued scrip notes, denominated at $1 or less, had been the solution to the wartime problem of a lack of coins to make change in daily commerce.

At least 130 enterprises in New Orleans issued scrip, and most of that scrip was printed locally. Businesses such as flour mills, restaurants, brass works, express companies, and a manufacturer of firearms for Confederate troops all issued scrip.

To instill public confidence in scrip issuers, the New Orleans city council’s Committee for Public Safety published a list of 13 approved issuers on April 28, 1862. Less than a month later, the committee added another 17 issuers to the “approved” list. City officials said scrip from those issuers would be redeemed with City of New Orleans notes dated May 6, 1862.

Wolka said New Orleans is the “most interesting and complex city in the nation from a paper money perspective.”