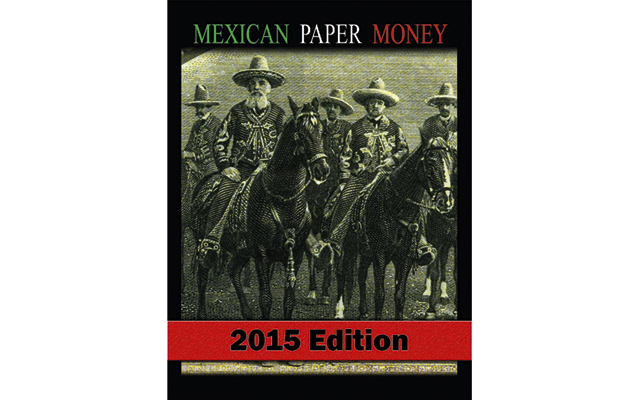 A “cover” image shows the forthcoming 2015 edition of Mexican Paper Money, a publication that will only be available digitally. It is being offered prerelease along with a discounted 2010 hardcover book edition of the work.

Researchers are working to update a standard work about paper money of Mexico.

The Mexican Coin Company, publishers of Mexican Paper Money by Alberto Hidalgo, Duane Douglas, Cory Frampton and Elmer Powell, announced April 24 that a 2015 edition would be issued in the coming months. The catalog will only be available in digital format, the publisher announced.

“This allows us to provide robust searching and indexing capabilities along with allowing this version to be directly connected to additional resources on the Internet,” according to the firm, in a statement from Frampton shared with Coin World.

The Carefree, Ariz., company is now offering the hardcover 2010 edition of Mexican Paper Money at a reduced price, which includes the 2015 edition on compact disc when it becomes available. The special price of $70 plus $5 shipping is available for a limited time. The 2010 book will ship immediately and the disc will be mailed when finished.

Researchers are asked to submit updates and missing information for the 2015 edition.

“While the 2010 Edition fulfilled its ambition in becoming the authoritative listing of all Mexican paper money, there were omissions and some duplications and errors did occur,” Frampton said in the announcement. “Please help us by telling us about any mistakes that you may have noticed.”

For notes already in the book, Simons asks for information about additional dates, series letters and overprints, mentioning plans to expand the historical descriptions about issuers and specific issues.

Other desired improvements include adding images where no image is currently shown; replacing existing black and white images with color images; using images of high-grade, issued notes in place of specimen images; finding images of notes that are in higher grades than those currently in the catalog; and adding images and information for newly discovered notes.

Images should be digital scans at 300dpi or higher in tiff or jpeg formats, said Simons.

Pricing data will also be updated, with the view to “provide realistic market prices based on auctions, dealers’ sales and private transactions. There will always be sales both below and above catalog prices [but] we will be updating a significant percentage of the values.”

The Mexican Coin Company specializes in Mexican and Latin American coins and paper money, primarily focusing on rarities dated prior to 1930.