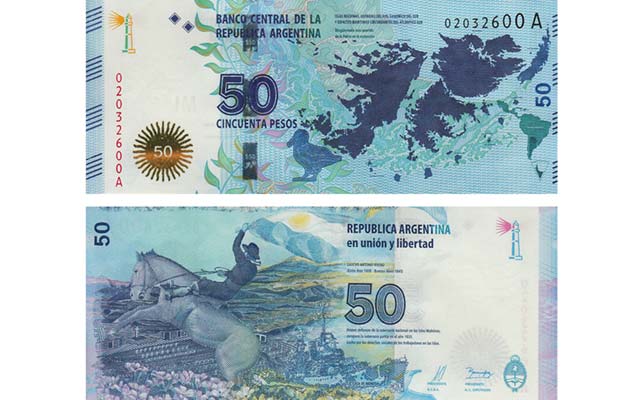 Argentina has issued a circulating commemorative 50-peso note to mark its claim over the Falkland Islands (or “Malvinas”).

The battle over the Falkland Islands has escalated, not with bombs and bullets but instead with bank notes.

The new series features a title translating to “Falkland Islands, a sovereign love.”

The design includes a map of the Falkland Islands and South Georgia and South Sandwich, symbolically representing Argentina’s claimed sovereignty over the archipelago.

Britain contends that it has sovereignty over the Falklands but Argentina also lays claim to the islands, which it calls Las Malvinas. Tensions notably escalated in 1982 when both nations fought a short-lived war over the claim. Though Britain defeated Argentina, the South American nation continues to dispute British claims to the region.

The face of the note shows the regional map, with a lighthouse and golden sun at far left serving as security features.

A line drawing of the albatross that makes the region home is also seen on the face.

The reverse is equally rich in symbolism.

Dominating the scene is Antonio “El Gaucho” Rivero, a gaucho (cattle herder) who murdered five officials and settlers at Port Louis on the Falkland Islands on Aug. 26, 1833, during the early days of British rule. The Argentinians would eventually view Rivero as a folk hero in the battle against British rule.

The lightship ARA General Belgrano, which was destroyed during the conflict of 1982, and a gull (native to both Argentina and the Falklands) representing peace, appear on the note’s back.

Flowers buttress the Darwin cemetery, where the remains are buried of some of those who died in the 1982 battle.

Other current 50-peso notes with different designs remain valid and are not being replaced by the Malvinas issue.

Brits and Falkland Islanders used social media to poke fun at Argentina for issuing the note.

This is not the first time that Argentina has memorialized the “Malvinas” conflict on its money; in 2007, the central bank issued a circulating commemorative 2-peso coin, as well as several collector coins, to mark the battle’s 25th anniversary.