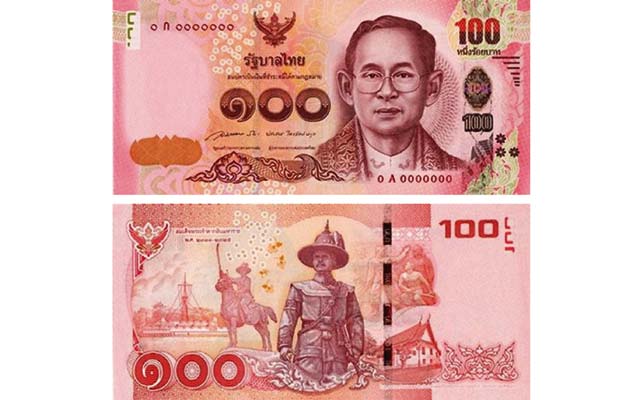 A portrait of King Rama IX of Thailand appears on the face, and a vignette of a statue of King Taksin the Great is on the back of the new 100-baht notes in circulation since Feb. 26, 2015.

A new 100-baht note is in circulation in Thailand as of Feb. 26, according to a news release from the Bank of Thailand.

A portrait of currently reigning King Rama IX appears on the face and a statue of King Taksin the Great is found on the back of the notes.

In addition, a hidden numeral 100 is inside the copper-colored ornament on the far left side, on the face of the note. As the note is tilted side to side, the numeral can be seen.

Other security features include:

??A reflective holographic foil strip on the right side of the note’s face contains the Royal Emblem, with Arabic numerals for 100 in the center that appear to switch to Thai numerals when the note is tilted.

??A windowed color-shifting security thread is partially embedded on the reverse side that changes from magenta to green upon tilting and features an inscription related to the denomination.

??In the upper right end of the face design are seven tactile marks, embossed horizontal lines of sequentially decreasing length, leading downward toward three more tactile marks, in the shape of flowers that represent the letter H, symbolizing “Hundred” (100), the denomination numeral.