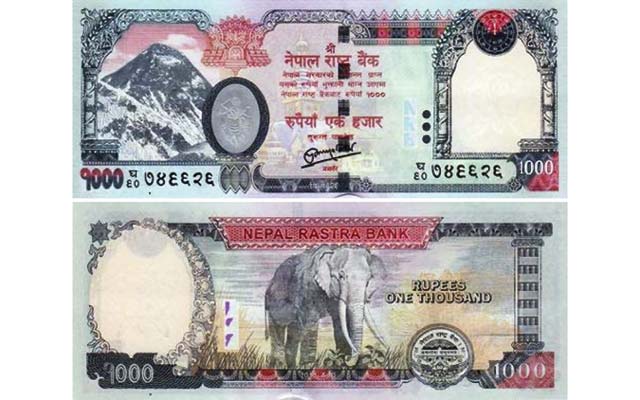 The Central Bank of Nepal issued a new 1,000-rupee note on Feb. 27, 2015. It was announced in the online world paper money resource, Banknote News, on April 26, the day after a massive and tragic earthquake devastated Katmandu and avalanches killed more than 7,000, including a number of climbers on Mount Everest. In an ironic coincidence, the main feature on the note’s face is a view of Everest. The back depicts an elephant.

The issue is similar to the 1,000-rupee note it is replacing but the bank’s name, Nepal Rastra Bank, is printed on the back in English for the first time.

All Nepalese bank notes have pictures of animals native to the country on the back — yaks, bucks, deer, rhinos, goats, and tigers are the others. As for the elephant, according to an article last October in Nepal’s English language The Himalayan Times, there is a question as to whether this particular one, used since 1974, is Asian or African. Elephant experts, after analysis of tusks, ears, and other body parts, are of differing opinions. Another thought is that it is neither, just a hybrid piece of artwork.

The bank claims not to know the source of the image. A bank official said: “Many images were taken a long time ago. We don’t know who took them or from where they were extracted. But they are definitely not artwork.”

The issue should soon be put to rest. According to the paper, the bank is “planning to replace all images of animals with those found in Nepal. If things go as planned, the 1,000-rupee note will soon contain a picture of twin baby elephants — along with their mother — born some time ago at Chitwan National Park.”