National bank notes were issued across the U.S. 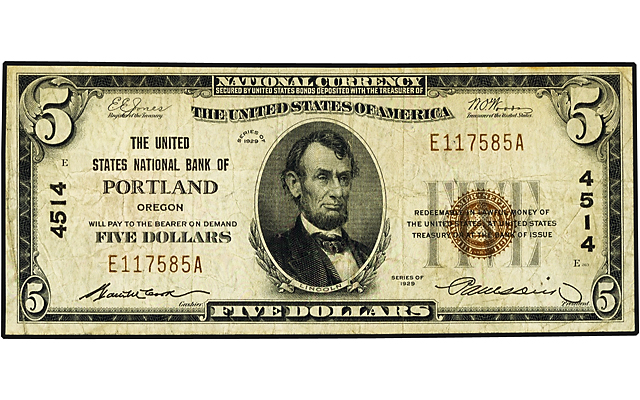 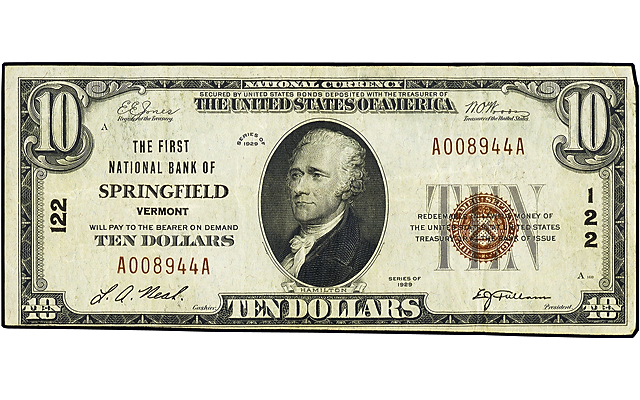 This $10 note, issued by the First National Bank of Springfield (Vermont), was graded Very Fine to Extremely Fine by Heritage Auctions. The firm sold the note for $158.63 on April 29, 2014.

Editor's note: The following is the third of a three-part Coin World series about collecting national bank notes using knowledge of U.S. geography and the alphabet, prepared by Michele Orzano for the November 2014 monthly edition of Coin World.

Notes issued by banks in states with names beginning with A through N have already been discussed in the first two parts of this featuer.

For the states starting with the letter O, Oregon got the call, between it and Oklahoma, and the United States National Bank of Portland stepped up to the plate.

The bank has one of the “forbidden titles,” according to the Act of May 24, 1926 which said banks could not use the words “United States” or “Federal” or “Reserve” in their bank titles. At the time, existing banks with those words in their titles were grandfathered into the law.

Pennsylvania and Rhode Island had no competition as “P” and “R” states.

For Pennsylvania, I selected a note from the Central National Bank of Columbia. Columbia is in Lancaster County, known as the heart of “Pennsylvania Dutch” country for the number of Amish families living in the area.

From Rhode Island, the Columbus National Bank of Providence was the last issuing charter to open its doors in the state’s capital. Providence is one of the oldest cities in the nation, having been established in 1636.

Decisions, decisions: South Carolina or South Dakota? I went with the “Black Hills” state of South Dakota. The Deuel County National Bank of Clear Lake did not open until January 1928, so it only offered small-size notes, and for a short time.

The town of about 1,000-plus is situated in the geographically interesting region of glacial-formed lakes and prairies.

Up Next: Texas, Utah & Vermont

Texas got the nod between it and Tennessee, and the First National Bank of Gorman, another bank whose notes are scarce, made the choice easy. Gorman is roughly 90 minutes south west of Fort Worth and was incorporated in 1902. It was the first place in the state to install a peanut shelling machine in 1940.

Utah had no competition, as no other state starts with the letter “U.” The First National Bank of Logan was located in the northern Utah town. Logan is known for nearby hiking trails in the Wellsville Mountains and Logan Canyon

No, I selected Springfield, a city located about two hours south of the Canadian border, because it offers a bigger “star” value.

Springfield is home to the oldest amateur telescope makers’ club in the United States. Its clubhouse, built in 1920, is named Stellafane (meaning “shrine to the stars” in Latin). It hosts an annual international gathering of telescope-making devotees.

Then from another big lineup, the “W” states of Washington, West Virginia, Wisconsin and Wyoming, I selected West Virginia.

Fairmont, located about 90 minutes south of Pittsburgh, was home to the First National Bank in Fairmont. However, the town might be best known as the site of the first Father’s Day celebration in 1908. It was held in honor of the more than 300 men and young boys who were killed in the Monongah Mining disaster of Dec. 6, 1907.

And, finally, I decided not to select any Washington, D.C., national bank, though several existed, because I wanted to stick to just selections from the 50 states.

If you want to follow this collecting plan, you do not have to collect notes from all your states at once. Start with states on the East or West Coasts or smack-dab in the middle of the country.

You could also limit your search to one state, and follow the alphabet within that state for as far as you can go.

For example, no state names begin with the letters B, E, J, Q, X, or Z; however, many cities and towns bear names that do start with those letters. And many of those were home to national banks.

For example, just in Ohio, we find the small village of Bellaire, home to the Farmers and Merchants National Bank.

Up next, the Potters National Bank of East Liverpool. The name might conjure up images of old man Potter in the movie It’s A Wonderful Life, but this bank takes its name from  East Liverpool’s best known product, pottery. It was known as the “Pottery Capital of the World.” In the 1800s more than 300 pottery-making firms operated in the town.

And right up the road from Coin World’s home in Sidney, Ohio, is the little village of Jackson Center, once home to the First National Bank in Jackson Center.

Though most won’t recognize the town name, they will certainly recognize the familiar silver-colored Airstream Travel Trailers that are made in Jackson Center.

Ohio is also home to banks in towns with names that begin with Q, X and Z. The Quaker City National Bank was located in Quaker City, a village of about 500 residents. It sits at the foothills of the Appalachian Mountains about 80 miles east of the state capital in Columbus.

The city of Xenia is situated along U.S. Route 35, about 21 miles east of Dayton. It was home to the Citizens National Bank of Xenia. The city became a household name in 1974 when an F5 tornado tore through it.

And, last but not least, is Zanesville. The First National Bank of Zanesville was located in this city in central Ohio. The town is one of the very few places that can claim to have a Y-shaped bridge, three spans that cross the Licking and Muskingum rivers.