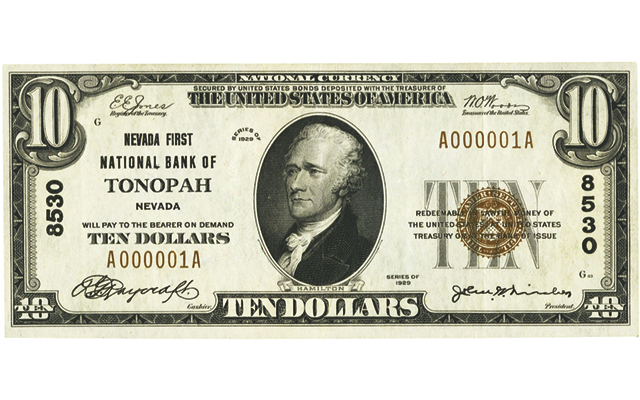 October was a period of recovery from three frenzied auctions in a period of less than a month.

Even now, it is worth taking a look at them from more than the “prices realized” perspective. Different venues and events result in dissimilar auctions.

The two sales in Rosemont, Ill., by Heritage Auctions (163 lots, $3 million) and Stack’s Bowers Galleries (454 lots for $7 million) in August had an average selling price per lot of over $15,000. This is in stark contrast to the massive Heritage sale held in conjunction with the Long Beach Expo just a few weeks later. Its 3,567 lots resulted in a total take of $4.8 million, a huge number, but an average price per lot of about $1,350.

Interestingly, in an era when our oft-stated mantra is that federal large-size type notes are the centerpiece of the market, this category was represented by only three of the 24 notes that sold for more than $15,000 at the Long Beach sale. The others were a $10 California national gold bank note, an early Confederate $100 note, two small-size notes in top quality, two small-size errors including a $20/$10 note, and 15 national bank notes, including three extraordinary uncut sheets from the County First National Bank of Santa Cruz (California) with every note bearing the serial number 1.

Nationals were about a fifth (775) of all lots in the Long Beach sale. Especially as prices descended below several hundred dollars, a significant number of them were uncertified. This is a reflection of the national bank note market, where the conventional wisdom is contrary to other areas of collecting. The collector of nationals is less focused on type than on location, less on quality than on availability. The diverse ways of collecting them results in a wide but often thin market. So many nationals have been redeemed and they have been issued in the names of so many thousands of banks (more than 12,000 banks issued notes, for which there are now about 400,000 examples recorded), that the number extant for any single type of note can be very small. Following the advice that one should wait to purchase a higher graded note than one currently being offered will result in disappointment, because sometimes the highest grade will be no better than Very Good or Fine.

The Long Beach sale also offered 924 lots of large-size type notes of which 889 were third-party-graded. The top seller was from another longtime underappreciated type — Red Seal Federal Reserve notes. At $38,175 it was a $10 1914 Red Seal Federal Reserve Note graded by PCGS as Superb Gem New 67 Premium Paper Quality, one of only three graded this high. The price realized exceeded the previous high for the type.