National bank note from tiny town in Missouri are rare 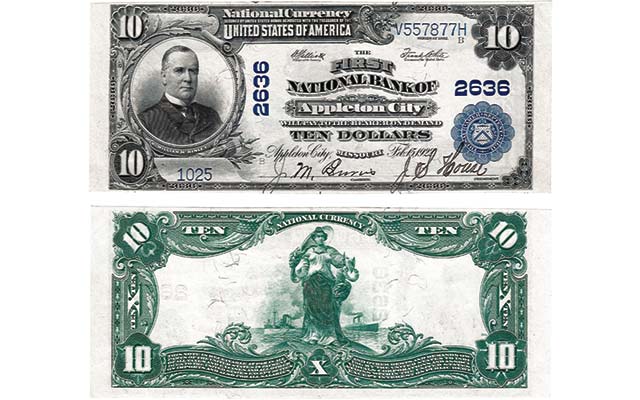 A reader discovered an extremely rare example of a national bank note from Appleton City, Mo.

I would be interested in knowing about this bank note and what kind of monetary value it has.

National bank notes are often called “hometown money,” because these were issued by individual banks in towns across many states from 1863 to 1928. Banks qualifying to issue notes received a 20-year charter that was renewable for 20 years. Banks were allowed to issue notes up to 90 percent of the value of U.S. government bonds they had on deposit with the U.S. Treasury.

The date on a note, like the Feb. 15, 1922, date on the reader’s note, does not always indicate the date the charter was issued, nor does it necessarily match the terms of the officials who signed the note.

The note found by the reader is a Third Issue, Third Charter note, meaning it was issued from 1916 or later. The 1025 bank serial number on the lower left side of the face indicates the note was issued before September 1925; that’s when the Treasury serial number, in the upper right corner, was replaced with a repeat of the bank serial number.

Larry Adams, curator of the Higgins Museum in Okoboji, Iowa, which has a specialized collection of national bank notes, confirmed that the museum lacks an example of this note.

National Bank Notes by Don C. Kelly includes a census of known national bank notes. The 2008 edition (the most recent) records two known $10 notes of this type from this bank, and values the note at $750 in Fine condition.