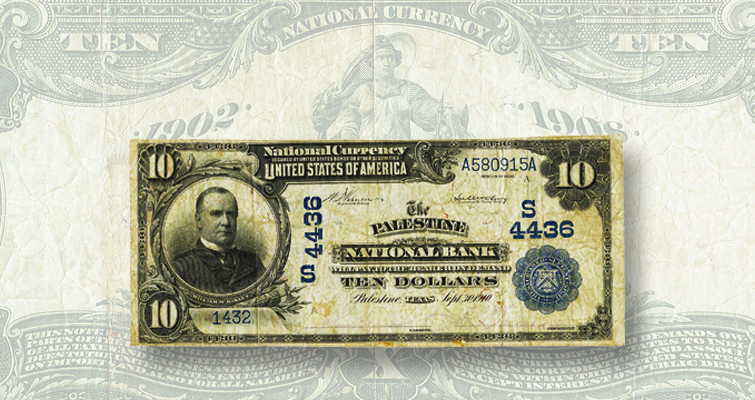 This Series 1902 $10 Date Back national bank note from the Palestine National Bank of Texas is unique and one of only three notes of any kind known from the bank. 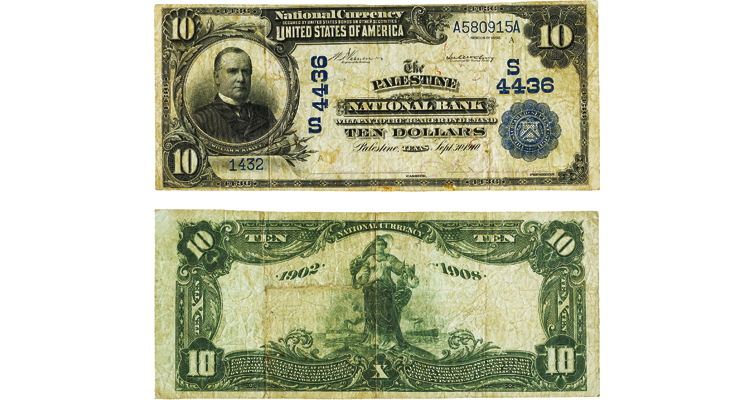 Paper Money Guaranty has assigned the Friedberg 619 note a grade of Fine 12. It is in Heritage Auctions’ Oct. 6 to 8 Currency Signature Auction.

One reason national bank notes are so appealing is that you never know what you will find, or where. That even applies to this writer, who did a double take this past July when one note stood out in an otherwise nondescript assortment of medium to low grade small- and large-size notes shown him by an acquaintance near here in Burlington, Vermont.

Just one national bank note was in the lot, a common Series 1902 $10 Third Charter Period Date Back note, but from an uncommon bank — the Palestine National Bank (Texas), charter number 4436. Some quick research confirmed my suspicion. There are no records of this note’s existence.

Heritage calls it a “wonderful new addition to the census from the second, and by far the rarest, of this Anderson County location’s four issuers. ... Fortunately for collectors, this is an evenly circulated note showing just honest wear along with decent color and legible stamped signatures.” The cataloger concludes, “A great note for today’s generation of Lone Star State collectors.”

In fact, only two other notes are even recorded from this bank. One is a Series 1882 $5 Brown Back note that is reportedly in an institutional holding. The other, a $20 Date Back note in Fine condition, has not been seen publicly since 2001 when Heritage Auctions sold it a part of Steve Ivy’s collection.

The rarity of pieces from the Palestine National Bank can be explained by its short lifetime. Don Kelly’s census reveals that the bank was chartered in October 1890 and liquidated on Jan. 21, 1913, when it was acquired by the Royall National Bank, also of Palestine. In total it issued $202,300 worth of Second Charter Brown Back notes and Third Charter Date Back notes. Of that total, $26,045 was still outstanding in 1913.

Three other national banks operated in Palestine during the large-size note-issuing era. No notes are reported from the Robinson State Bank. The First National Bank of Palestine issued $1,604,060 worth of currency, and the Royall National Bank $1,885.560. Another Palestine bank, the East Texas National Bank, was founded in 1911 and issued only small-size notes.

As for the new discovery note, Paper Money Guaranty has assigned the Friedberg 619 note a grade of Fine 12. It is in Heritage Auctions’ Oct. 6 to 8 Currency Signature Auction.

How did it find its way from east Texas to northern Vermont? The owner’s family is originally from Palestine. 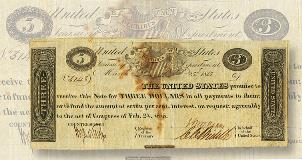 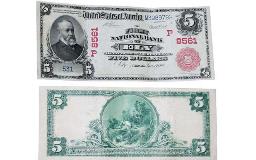 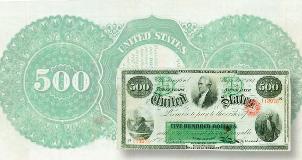