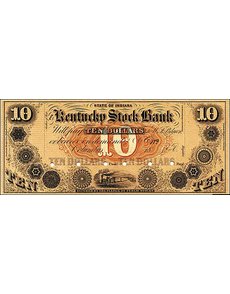 This $10 note was printed for the Kentucky Stock Bank, which was not located in Kentucky but in Columbus, Ind. Notes issued by the bank were secured by state “stocks” (bonds) that the banks’ owners purchased and deposited with the auditor of state. This particular bank chose to use bonds from the state of Kentucky to secure its circulation, thus the name of the bank.

So, why was the Kentucky Stock Bank located in Columbus, Ind.?

Like so many questions about obsolete paper money, a straightforward answer exists. The Kentucky Stock Bank was one of a large number of “free banks” originally authorized under legislation in 1852.

The circulation was secured by state or federal “stocks” (actually bonds) that the banks’ owners purchased and deposited with the auditor of state.

In theory, if a bank failed, the bonds would be sold and the proceeds would be used to redeem the notes. This particular bank chose to use bonds from the state of Kentucky to secure its circulation, thus the name of the bank.

Benjamin Jones apparently brought banking experience to the table and served as cashier in the new bank.

William McEwen (variously spelled also as “McEwan” or “McEwin”) brought additional capital to the bank (his assets in 1860 totaled more than $100,000) and served as president.

Both men were born in North Carolina and were close neighbors.

The bank, unlike many others, was successful and began to voluntarily wind up its affairs in approximately 1863. The last reported outstanding amount still in circulation for the bank totaled $3,481 as of Oct. 31, 1875.

After winding up its affairs as a circulation-issuing free bank, the bank changed its name once more, to McEwen & Sons Bank.

Benjamin Jones is listed in the 1870 census as a broker and apparently did not continue a direct association with the bank.

Perhaps Jones’ banking and financial expertise was missed, as this last banking incarnation failed disastrously in 1871, with creditors only receiving six cents on the dollar.

The $10 note illustrated above shows a simple way that banks fought counterfeiters who wished to raise notes to larger denominations.

Count the number of small round dies (little round decorations that line the bottom and sides of the note) — yes, there are 10 of them, the same as the denomination.