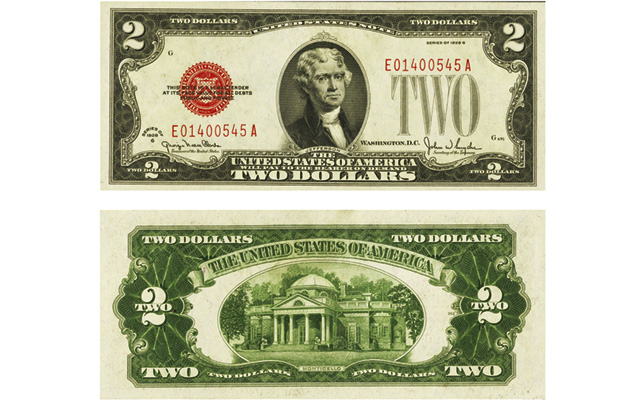 This Series 1928G $2 United States note is an example of a readily available small-size note. It was graded Gem New 66 Premium Paper Quality by PCGS Currency. It sold for $94 in a Dec. 30, 2014, Heritage Auctions Internet sale.

A characteristic of nearly every auction of U.S. paper money is that while the bulk of the promotional emphasis is on large-size notes, these rarely form the bulk of the sale’s contents.

When we talk of the state of the market we nearly always concentrate on large-size notes as an all-encompassing barometer.

With United States paper currency, large-size notes still draw the most attention. These notes are well-documented, diverse in appearance yet somewhat uniformly attractive (especially compared to the paper money of today), and are the subject of interest to a vast market of buyers and sellers.

Small-size notes are far more readily available at low price points, most of which have been stable. Many small-size Federal Reserve notes can even be acquired from circulation at face value.

Fractional notes continue to have a small and stable market, except for the greatest rarities, which provoke feverish and unpredictable bidding. Otherwise prices have been mostly unchanged.

National bank notes (issued in both large- and small-size forms) often constitute the biggest part of an auction. With the exception of very rare “trophy” notes, prices are dependent on the existence of a strong collector base. Sometimes, even if a national bank note is rare, the supply is greater than the demand in the market.

Among the biggest winners of late are those who began buying obsolete currency, also known as “broken bank notes,” years ago, and who are now sellers. Thanks to the entry of new collectors who are attracted by low prices relative to rarity, interest and results have skyrocketed far out of proportion to what should be expected.