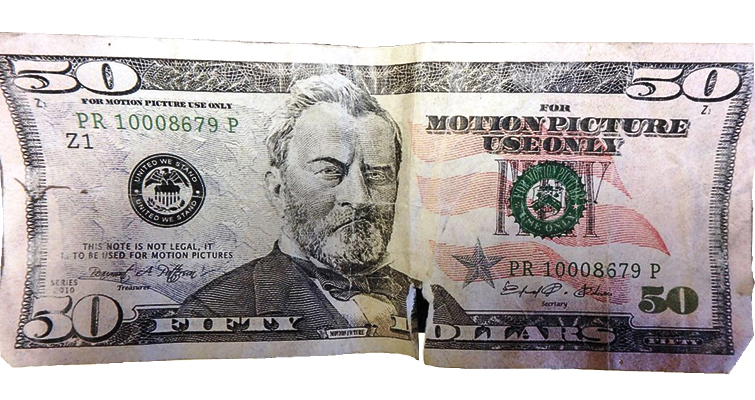 Movie prop money similar to this $50 note found in circulation in Alaska was reportedly used by a Walmart employee in Florida as substitutions for real notes in packs of money she was tasked to count.

The movie money madness continues — it has even become a transcontinental movement. The latest news is from Deltona, Fla., where in a Walmart safe, store employees found that the middle 76 notes in a $10,000 pack of $100 bills looked odd. In fact, says Fox35 Orlando, they had a different thickness and texture and were printed with the words FOR MOTION PICTURE USE ONLY. The store manager immediately marked the bundle “do not use.”

It did not take long for surveillance video to show it was a clumsy inside job. The person responsible for counting the cash every day was filmed pulling the switch. When she realized that the fakes were discovered, she tried to remove them, also on camera. She was arrested by nightfall on charges of grand theft and obtaining property by fraud.

What is movie prop money?

As Paul Gilkes wrote in a 2004 article in Coin World, “Often, it is not economically feasible to use genuine notes or coins in a film or television show, so the film or show's producers must rent their props or create their own.”

These prop notes are printed by companies who supply the entertainment industry with them.

In the distant past, movie and television companies were prohibited by federal law from using real paper money in their productions, so they were forced to use replica notes. If you have seen a lot of old movies, you may have noticed that older movies tend to have notes that are at best only representative of genuine paper money, while more recent productions use the real thing or at least prop notes. The clip of the ending of the classic It’s a Wonderful Life seen below features a basketful of prop money being poured out on a table shortly after the four-minute mark.

Older prop money can be considered collectible and references exist. As columnist Gerald Tebben wrote in 2007, “In 2005, [then] fellow Coin World columnist Fred Reed wrote a book about movie money, Show Me the Money! The Standard Catalog of Motion Picture, Television, Stage and Advertising Prop Money, which details hundreds of movie props. Anyone interested in collecting prop money would benefit from owning this book.