Money during the American Civil War 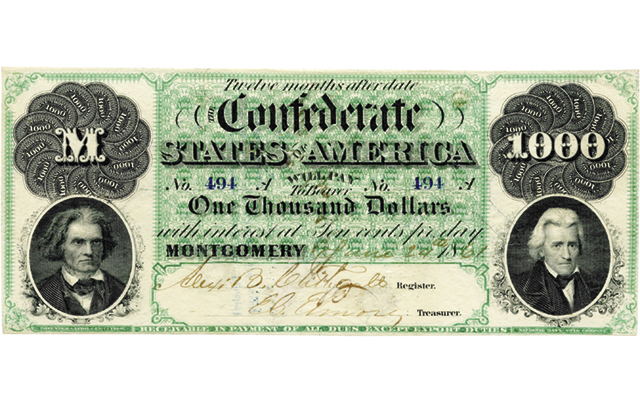 A $1,000 “Montgomery note” printed by the National Bank Note Co. for the Confederacy is one of the most famous and most numismatically desired items from the Civil War. Examples sell into high five figures at auction.

From the viewpoint of federal, Confederate, and temporary money produced during the Civil War, America has seen nothing like it before or since. The war had been envisioned by the Union as an easy win, and in April 1861 President Abraham Lincoln issued a call for volunteers to serve for 90 days. By December 1861, both sides had scored victories, and no one was sure who would win.

Citizens began to hoard gold coins, which disappeared from circulation by January 1862, followed by silver coins in the late spring, and copper-nickel cents by the second week of July. For the first time in history, America had no federal coins in circulation!

In July the Treasury Department decreed that ordinary postage stamps were legal tender for many transactions. Then arose many different privately issued monetary substitutes.

John Gault patented a brass frame encasement with a clear mica front behind which postage stamps of values from 1 cent to 90 cents could be placed. These circulated for face value.

Postage stamps put in small printed envelopes also circulated as money, as did small-denomination scrip notes issued by merchants, banks, towns, and others.

The Treasury Department issued postage currency with stamp designs, followed by fractional currency. Millions of bronze cent-sized tokens were issued by merchants and other entities, to the extent of thousands of versions.

Among larger currency, federal demand notes in 1861 (redeemable in gold or silver coins before hoarding began), legal tender notes in 1862 (not redeemable in coins), and national bank notes in 1863 (likewise not redeemable) were produced in large quantities. State-chartered banks issued millions of dollars in their own notes.

In the South, the Confederate States of America started by commissioning the National Bank Note Co. in New York City to print its first paper currency — in March 1861 before the war began. Values of $50, $100, $500, and $1,000 were made. It was thought, by some, that the CSA and Union would co-exist on friendly terms and become trading partners. That didn’t happen, of course.

We must not forget federal coins from cents to $20 double eagles. Although no reliable count can ever be made of the number of different varieties that were made of minted and printed money during the Civil War, certainly it is on the far side of 10,000.