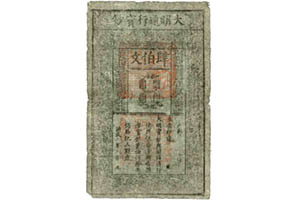 This rare Ming Dynasty era note of the 400-cash denomination, believed to be unique in collector hands, will be offered at auction in Hong Kong by Stack’s Bowers Galleries March 30 to April 2.

A rare Ming Dynasty era note of the 400-cash denomination will be offered at auction in Hong Kong by Stack’s Bowers Galleries March 30 to April 2.

The note is the highlight lot of the auction and is believed to be unique in collector hands. The note, likely to be the only collectible example known, is from the Dr. Ernest A. Ikenberry Collection.

Ikenberry, who died Oct. 30, 2013, was born in China while his parents were missionaries in Shanxi province. He collected Chinese coins, early Chinese paper money, and monetary artifacts while living in China before he and his family were forced to flee China after the 1937 Japanese invasion.

The note is printed on mulberry paper in a large vertical format. The design on the face shows four strings of cash coins at center with denomination above. The year is printed at lower left. The back design features Chinese lettering.

“The Ming Dynasty was the ruling dynasty of China for 276 years spanning from 1368 to 1644. During this banknote’s circulation period (1368-1398), Zhu Yuanzhang or the Hungwu Emperor was in power. He was the founder and first emperor of the Ming Dynasty. This dynasty has often been considered one of the greatest eras of orderly government and social stability in human history,” according to the catalog description.

According to the auction firm’s description, the note has “appealing quality for the grade with well defined vermilion stamping on both the face and back. Minimal edge distractions with only a clipped lower left corner. A few typical small internal tears but mostly wholesome.”

The auction will be held at the Mira Hotel Hong Kong in Kowloon, Hong Kong. For more information about the auction, contact Stack’s Bowers Galleries on the East Coast toll free at 800-566-2580 or on the West Coast at 800-458-4646.