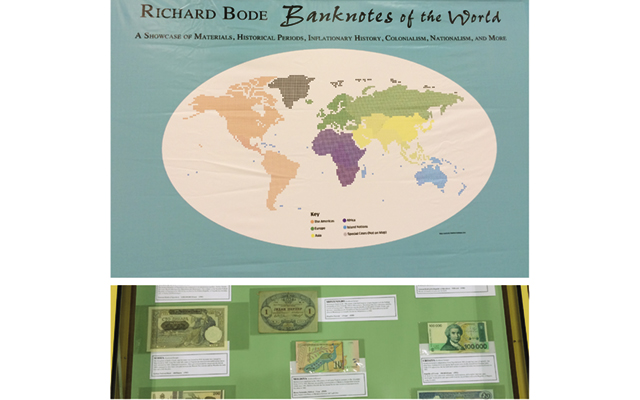 Lyn Knight Currency Auctions treated visitors to the International Paper Money Show in Memphis, Tenn., to a worldwide "scavenger hunt" with a display of notes from the collection of Richard Bode. Among notes in the display, one shows the image of a peacock and was an answer to one of the questions on the scavenger hunt questionnaire.

It was dark and stormy the night before the opening of the 38th annual International Paper Money Show in Memphis, Tenn.

But sunny skies reigned supreme June 13 to 15 as collectors and dealers from around the world gathered at the Cook Convention Center for the bourse, exhibits and educational sessions.

Collectors were welcomed to the bourse with a “scavenger hunt” using selected world notes from Richard Bode’s collection. Bode and his wife, Kathy, were missionaries in the Philippines for 12 years. Then the couple spent nearly a dozen years in the former Union of Soviet Socialist Republics and central Asia.

Participants could answer a series of eight questions by looking at the cases of notes in the display. Two of the questions were: “Which country’s currency features an infamous ‘Evil Dictator’?” (Iraq) and “Name one of two countries that use an image of a peacock on their notes” (Moldova and Algeria).

Question sheets could be redeemed at the registration kiosk for a free packet of world bank notes.

The Society of Paper Money Collectors kicked off the festivities at its annual breakfast and fundraising raffle on June 13 by inducting more than a dozen paper money collectors, researchers and dealers into its newly formed Hall of Fame.

“These great friends have distinguished themselves personally and professionally above and beyond in service to our hobby and we thank them,” said Pierre Fricke, president of SPMC.

Also during the breakfast, the society presented Benny Bolin with its Nathan Gold Memorial Award for lifetime achievement and service. Bolin has served as president of the society as well as in other elected and appointed positions.

Dennis Tucker, publisher at Whitman Publishing, was named the recipient of the society’s Forrest Daniel Award for Literary Excellence. Tucker has edited many popular numismatic books published by Whitman. He also edited the first two volumes of the recently published Whitman Encyclopedia of Obsolete Paper Money, a multivolume set.

Civil War Stamp Envelopes, The Issuers and their Times by Fred Reed III won the society’s Wismer Award for the Best Book of 2013.

Mack Martin took top honors from the society, its Best in Show Exhibit Award for his exhibit on baby bonds.

For more information about the June 18 to 21, 2015 show, visit the website at www.memphisipms.com, or contact IPMS bourse chairman Doug Davis by directing email to doug@memphisipms.com.