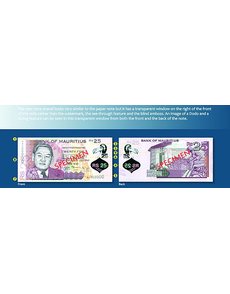 Image courtesy of the Bank of Mauritius.

Polymer bank notes in 25-, 50- and 500-rupee denominations began circulating in Mauritius on Aug. 22.

The designs on the nation’s first polymer notes are similar to the designs and colors used on the same denominations of the island’s prior circulating paper bank notes. The polymer and paper notes will circulate alongside one another and both will be accepted as legal tender.

A news release from the Bank of Mauritius said the new polymer bank notes contain many security features, including a transparent window showing the image of a dodo bird, numbers printed with magnetic ink that become fluorescent under ultraviolet light and “swing features” printed in iridescent inks that change to a different color depending on how the feature is viewed.

Mauritius, an island in the Indian Ocean, was once the home of the dodo bird, which is now extinct. In addition to being a design element on the island’s bank notes, an image of a dodo also appears in the nation’s coat of arms.

The use of polymer allows use of sophisticated security features that are easy to verify and difficult to counterfeit.

The 25- and 50-rupee polymer notes were printed by French security printer Oberthur Technologies on Innovia Security’s Guardian substrate. The 500-rupee bank note was printed by the British firm De la Rue on its Safeguard substrate. For more information about the new polymer bank notes, visit the bank’s website at www.bom.mu. ¦