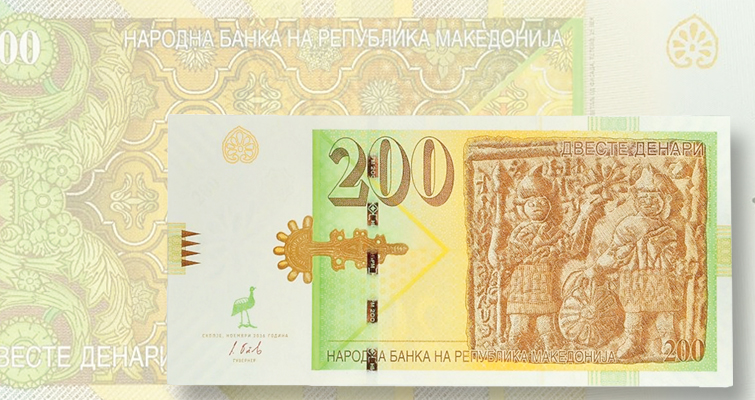 The National Bank of the Republic of Macedonia is rebalancing the current structure of the notes in circulation with new issues and by dropping a denomination.

Origianl images courtesy of National Bank of the Republic of Macedonia. 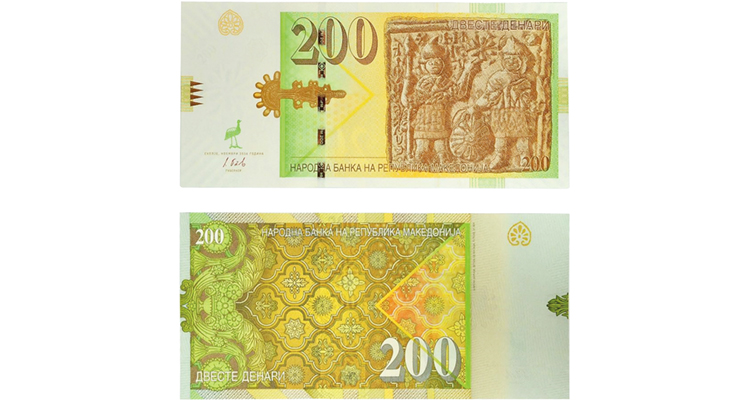 Images courtesy of National Bank of the Republic of Macedonia.

The National Bank of the Republic of Macedonia will release 200- and 2,000-denar bank notes on Dec. 15 and withdraw the 5,000-denar note from circulation.

The reason, the bank says, is to rebalance the current structure of the notes in circulation. The 5,000-denar note was not widely accepted because its high face value, the equivalent of $90 in U.S. funds, limited its use in daily commerce.

The 200-denar note’s design is devoted to archaeology. Its face shows a terra-cotta icon from the excavations at Vinica that is said to portray the Old Testament story of Joshua and Caleb and the victory of the Israelites over the Amoreans. They date from the fourth to sixth centuries. To the left is a bronze clasp from the beginning of the seventh century found near Prilep. The back shows part of the facade of what is called the “Decorated Mosque” in Tetovo and elements taken from the decoration of the marble floor tiles of the “Isaac Mosque” in Bitola.

The 2,000-denar note shows a Macedonian bride in folk costume and a pendant, in the form of a poppy head, that dates to the seventh century B.C. The back shows the inside of a 16th century gilded vessel, with two peacocks at the center.