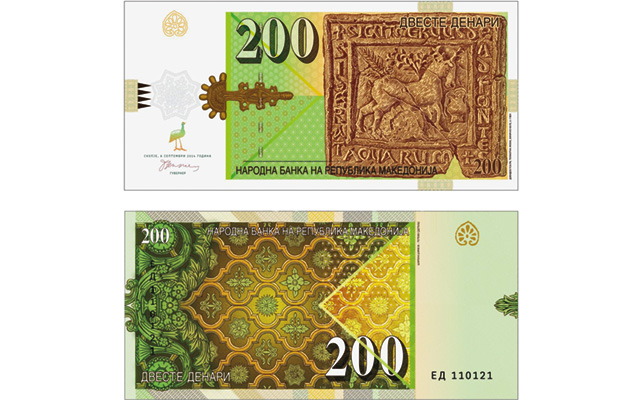 The face design for the 200-denar features a portion of Psalm 41, of David, from the Old Testament, which appears on medieval terracotta icons found in Vinica. The back design shows an architectural art element of the frontal facade of the Painted Mosque in Tetovo.

Images courtesy of the National Bank of the Republic of Macedonia.

The National Bank of the Republic of Macedonia has not announced a date for when the 200- and 2,000-denar bank notes would be placed into circulation.

The face design for the 200-denar note, according to a Nov. 14, 2014, news release from the National Bank of the Republic of Macedonia, features a portion of Psalm 41, a Psalm of David in the Old Testament, as it appears on some of the early medieval terra-cotta icons found in archaeological discoveries in Vinica. Also depicted is an early medieval bronze fibula (brooch) from the beginning of the sixth century, found near Prilep.

The back design of the 200-denar note shows an architectural art element of the frontal facade of the Painted Mosque in Tetovo, and floral decorative elements taken from the marble floor tiles of the famous Isaac mosque in Bitola, built at the beginning of the 16th century.

The face of the 2,000-denar note shows a Macedonian bridal dress from Prilep.

The back design of the 2,000-denar note depicts designs from inside a 16th century gilded bowl, showing two facing peacocks surrounded by lavish floral decoration.