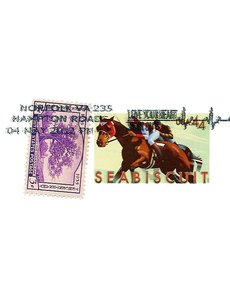 A 1935 3-cent Connecticut stamp was recently paired with a 2009 44-cent Seabiscuit stamp to mail an envelope.

When I was 10, I was seduced by the dark side and tried collecting stamps. I remember sitting in a crook of the cherry tree in front of our farmhouse and reading/dreaming about the rarest stamp of all — an 1856 1-cent stamp from British Guiana.

It was worth, as I recall, the astonishing sum of $5,000 in 1959. I was certain that I’d find one in one of those packs of foreign stamps advertised in comic books.

Supposedly those packs of 500 or 1,000 stamps were put together by missionaries who were too busy converting heathens to look for rare stamps.

I never found the rare 1856 stamp and my stamp collection was lost along the way in my family’s meanderings.

Over the years the ranks of stamp collectors have dwindled — a fact that some coin clubs have made good use of.

Postage is a killer for club treasuries; every newsletter requires 45 cents postage.

But there’s a way to trim postage costs 20 to 25 percent.

As the estates of deceased stamp collectors are settled, executors discover there is no market for the sheets and sheets of mint postage stamps their original owners had put away.

Lots of old stamps, even some 75 and more years old, are worth next to nothing to collectors. They do, however, retain their full utility as postage.

The sheets are often bundled in lots of $100 to $500 face and sold wholesale or auctioned for 75 cents or 80 cents on the dollar.

I get mail from several coin clubs that use the old postage stamps. Whenever I get mail with a half dozen or so colorful stamps affixed, I tear them off and check the Web to see how old they are.

American Bicentennial stamps from the 1970s are common. Three 1976 13-cent stamps paired with a 6-cent stamp or two 3-cent stamps work for a newsletter.

I was particularly pleased this spring when Jerry Lebo, secretary of Central States Numismatic Society, sent me a letter with a 6-cent 1949 airmail stamp on it. It’s not every day you get a stamp from the year you were born.

One recent letter bore a 3-cent 1935 Connecticut Tercentenary stamp. In Mint condition, the stamp had so little value that it was used for postage in 2012 — 77 years after a collector purchased it at the post office.

Every few months I gather up the old stamps and place them in the coin club auction.

The buyer rarely pays more than the $1 starting bid, but as a collector, he’s now obligated to preserve something so old that it really wouldn’t be right to throw it away.