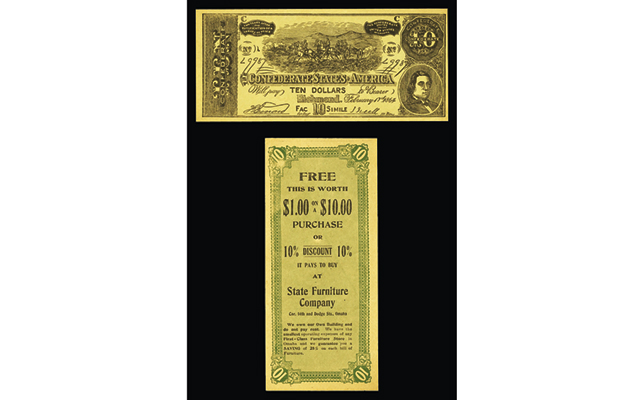 This advertising flyer was made to look like the face of a genuine Confederate States of America $10 note. The back of the note gives the particulars concerning the discount for buyers who stopped at the State Furniture Company in Omaha, Neb.

Editor's note: The following is the second of a four-part Coin World series about propaganda notes prepared by Michele Orzano for the July 2014 monthly edition of Coin World.

Advertising notes can be made from cash look-alikes and that puts them into the broad category of propaganda money.

Advertising notes handed out by traveling salesmen who roamed the United States in the late 1800s have been a part of America’s culture for more than a century. Many manufacturers of so-called “wonder cures” made use of advertising notes.

The example of an advertising note illustrated here has a design on the face that looks like a genuine 1864 $10 Confederate States of America note.

However, for the person who looks closely, there’s a clue at the bottom of the face design. A notation indicates the piece is a FAC SIMILE.

The back design is more quickly identifiable as an advertising flyer from the early 1900s. The text indicates the “note” is worth $1 on a $10 purchase, a 10 percent discount at State Furniture Company located in Omaha, Neb.

These types of “notes” were often “issued” by nonexistent banks and distributed as a way to get the word out about an advertiser’s product.

Most of these promotional items bear a numeral or denomination marking, and some even feature vignettes very similar to those then found on genuine circulating paper currency.

The Uncirculated furniture “note” sold for $15 at a Jan. 28, 2014, Heritage auction. Advertising notes are most often found in auctions and dealer lists among listings for obsolete notes.