Life in the 1800s can be chronicled in paper money designs 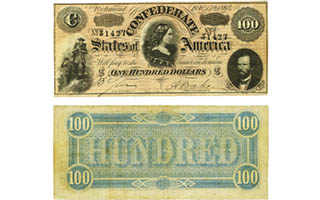 The central portrait on this Confederate States of America $100 note is a depiction of Lucy Pickens, wife of the governor of South Carolina. Her portrait was used to represent all Southern women.

Life in the southern United States in the 1800s are chronicled in designs on paper money. Many of those designs depict agricultural vignettes as a way to enshrine the importance of agriculture at the center of daily life.

But there are plenty of other designs, some allegorical representations of a patriotic Southern spirit “conquering” Northern forces, and some depicting people alive at that time who were important to the cause of the Confederate States of America.

Civil War battlefield hostilities began April 12, 1861, and continued through early 1865. Toward the end of the war, the CSA issued $100 notes dated Feb. 17, 1864 featuring a portrait of Lucy Petway Holcombe Pickens, the only actual woman to be depicted on CSA paper money.

She was one of the many intriguing characters in the drama of the Civil War. In 1861, three days before South Carolina seceded from the Union, Gov. Pickens took office. His wife, Lucy, was an advocate of the secession. Her portrait was used to represent all Southern women. She was known during and after her lifetime as the “Queen of the Confederacy” and was described as beautiful and brilliant.

This is just one sample of the scenes, characters and avenues of collecting Southern state and Confederate notes issued in the 1800s.