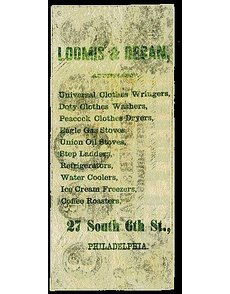 The back of this $3 obsolete note issued by Drovers Bank of Columbia (present-day Columbia City), Ind., enjoyed a second life advertising the Philadelphia firm of Loomis and Decan. Details of the face of the note can be read in reverse through the back of the note.

Many notes of defunct or worthless banks led second lives after the demise of their issuers.

The note that is the subject for this week’s column was issued by the Drovers Bank of Columbia (present-day Columbia City), Ind., a hamlet of 350 souls around 1849 to 1854.

The “bank” was, by most contemporary accounts, a completely fraudulent “paper mill” that did no legitimate business. It was undoubtedly nothing but a bad memory by the beginning of the Civil War.

But, as happened so often in the first decade or two after the Civil War, uncut sheets of the bank’s worthless paper money were repurposed by a creative merchant.

Since most of the bank notes produced prior to the war were uniface, with no printing or designs on one side, the ones that were worthless made perfect size handbills with plenty of space for messages to be printed on the back.

The cost was also attractive since the notes were available for whatever the price of scrap paper was at the time.

Using old notes was perfect for the advertiser — they had an interesting design that had served as money at one time to attract attention to the advertiser’s message, and the paper was both cheap and of good quality.

One can read the back of the Drovers Bank note and see that the Philadelphia firm of Loomis and Decan was involved with all sorts of household goods and appliances including stoves, laundry equipment, clothes dryers, refrigerators, water coolers, ice cream freezers, coffee roasters and even stepladders.

Undoubtedly the firm’s motto was “If we don’t have it, you don’t need it!”

But when were these ads in “circulation”?

A quick search of Philadelphia city directories provided the answer.

The firm of Loomis and Decan is listed as a seller of gas stoves located at 27 S. Sixth St. in Philadelphia in the 1869 edition. The firm’s principals were George W. Loomis and Edwin M. Decan.

Decan seemed to be a bit of a job hopper as he is also listed as a commission merchant in 1866 and a stationer in 1873 editions.

Next time you run across an advertising note see what you can find out about the second issuer.

You never know where the pathway may lead.