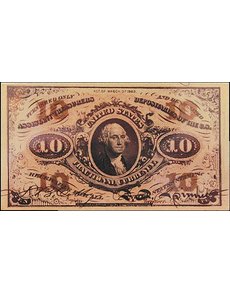 The discovery of a 10-cent Third Issue fractional currency note has been confirmed by Rob Kravitz.

Kravitz, a dealer in fractional currency in St. Louis, said Jim Jackson showed him the note at a coin show Jan. 19.

Kravitz examined the note at the show and later checked his library at home for any mention of the note in past auction transactions.

Finding no mention, Kravitz then called Jackson and said he believed the note was a discovery.

Kravitz, the author of A Collector’s Guide to Postage & Fractional Currency, said he checked The Encyclopedia of United States Fractional & Postal Currency by Milton R. Friedberg, published in 1978, as well as auction records and confirmed the note is unique.

The note has a printed signature, making it distinctive, with the words “Register” and “Treasurer” handwritten under the printed signatures. The uniqueness of this note derives from the fact that the handwritten words “Register” and “Treasurer” normally would only appear under autographed (hand-signed) issued notes or autographed specimen and proof notes.

The First Issue notes actually depict stamps in use at the time, and the notes are perforated like stamps. The Second through Fourth Issues, known as fractional currency, do not resemble postage. Fractional notes were issued into 1876. ¦