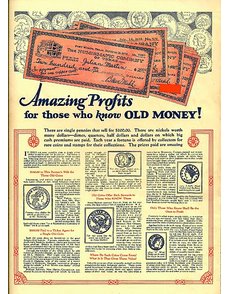 One of B. Max Mehl’s promotions. One headline reads “old coins offer rich rewards to those who know them.”

Which numismatic books are most common on the shelves of second-hand bookstores?

How can it be that a book last published more than 50 years ago is second only to the ongoing Red Book and Blue Book franchises at antiquarian bookstores?

The answer: Benjamin Max Mehl was not only the leading coin dealer of his time, he was the savviest numismatic promoter of all time.

In 1903, when Mehl started selling coins, the most successful dealers were East Coast, white, Anglo-Saxon Protestants. Mehl was a Jewish high school dropout from Fort Worth, Texas, whose residents like to say that “Fort Worth is where the West begins, and Dallas is where the East peters out.”

Max quickly grasped that the only way he could compete with the Easterners was to promote the stuffing out of his business. Other dealers advertised in coin publications catering to established collectors.

That primed the pump, but he found his ultimate gimmick in flogging 1913 Liberty Head 5-cent coins. He knew only five had been minted; furthermore, he knew who owned them. But he plastered his national ads with offers to pay an eye-popping $50 for an example; for a working man in the 1920s, this was two weeks’ salary!

Tens of thousands of people went on wild goose chases for those coins. Tales circulated of streetcar conductors snarling traffic as they searched for the ever-elusive 1913 Liberty 5-cent coin.

No one, of course, ever collected Max’s $50, but thousands became interested in coins while searching their change. Never one to miss an opportunity to make a buck, Mehl had just the thing for these folks: the Star Rare Coin Encyclopedia.

Not really an encyclopedia, but rather a cross between today’s Whitman “Blue Book” (it listed what Mehl would pay) and a retail price list (it contained pitches to buy coins and books from B. Max), it was the “gateway drug” that hooked thousands of people on numismatics.

For just a dollar, you were on Max’s “Mehling list,” receiving his auction catalogs and magazines (over the years, he published three different periodicals dedicated to moving his stock).

The Star Rare Coin Encyclopedia was phenomenally successful; by the mid-1920s, he was making almost as much from selling books as from selling coins (and remember, by that time, Mehl was America’s biggest coin dealer).

He produced 61 editions of his encyclopedia, not to mention 116 auction catalogs, more than 130 individual issues of his periodicals and dozens of price lists.