Kentucky $5 note tells the story of the Bluegrass Confederates 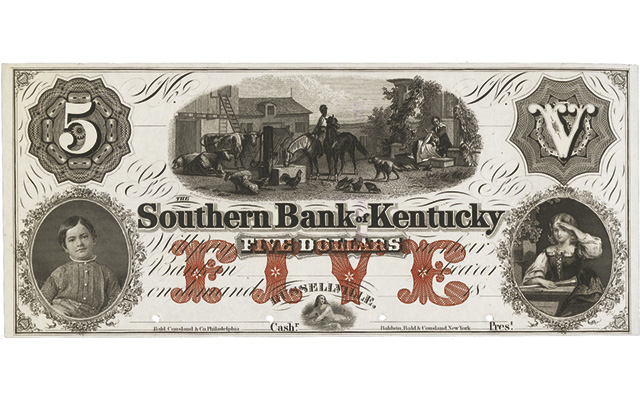 This Southern Bank of Kentucky (Russellville), note includes a vignette of a young boy in the lower left corner. The same vignette can be found on the 1861 $5 Confederate Treasury note.

The Civil War spawned some unusual events, including the situation that Kentucky found itself in at the beginning of the conflict.

Russellville, Ky., was home to the Southern Bank of Kentucky. The note illustrating this column is interesting in that it features a vignette of a young boy, and the same vignette is on $5 Confederate States of America Treasury notes issued in 1861.

The bank’s hometown had even more in common with the Confederacy. Antebellum Kentucky was a slave-holding state whose location put it on both the military and political front lines that formed with the outbreak of war in early 1861.

Kentucky attempted to pursue a course of neutrality early on, but ultimately placed itself in the Union camp after a failed invasion attempt by CSA Gen. Leonidas Polk resulted in the state government asking for federal assistance. In 1861, solid pro-Union majorities in the state’s congressional delegation and state legislature were elected.

Slaves made up 19.5 percent of the state’s population in 1860 and there was, nonetheless, a strong pro-Confederacy faction as well. It was the Southern sympathizers who met in Russellville on Nov. 18, 1861.

Of the state’s 110 counties, 68 were represented at this meeting, which passed an ordinance of secession and elected George W. Johnson as governor. Bowling Green was chosen as the new state capital. The Confederacy admitted Kentucky as a member state Dec. 10, 1861.

As a result, Kentucky, much like another border state, Missouri, found itself with not one, but two state governments, two governors, two legislatures, and two congressional delegations.

Kentuckians fought with distinction and conviction for both sides, but the state remained firmly in the Union column for the remainder of the war, with its so-called “shadow” state government being more of a curiosity than a legitimate government entity.