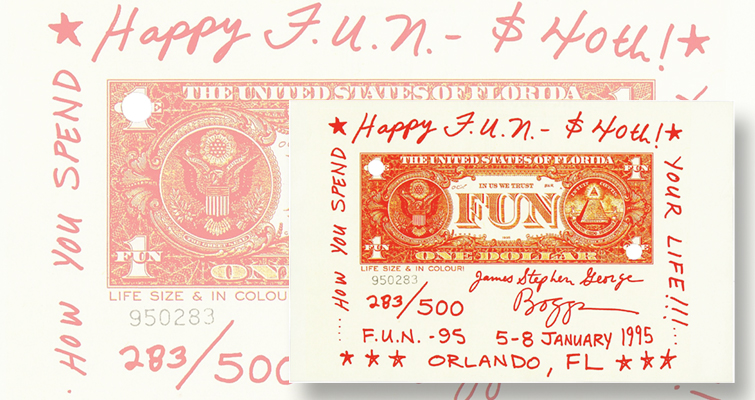 Five hundred of these interpretations of $1 Federal Reserve notes with the seals reversed could be obtained at the show with a donation to FUN or by renewing a subscription to Bank Note Reporter. These regularly sell for less than $100. 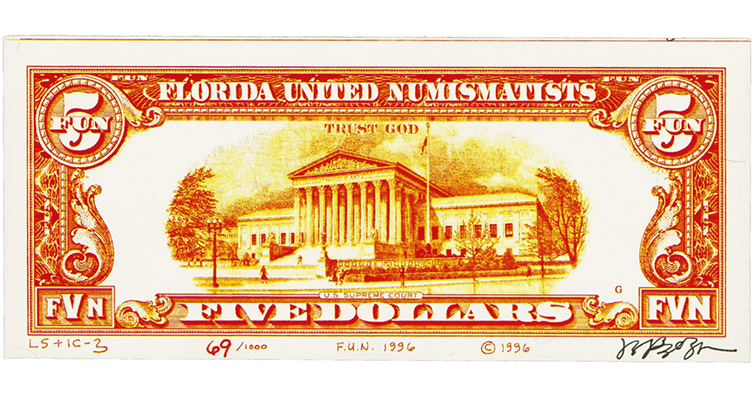 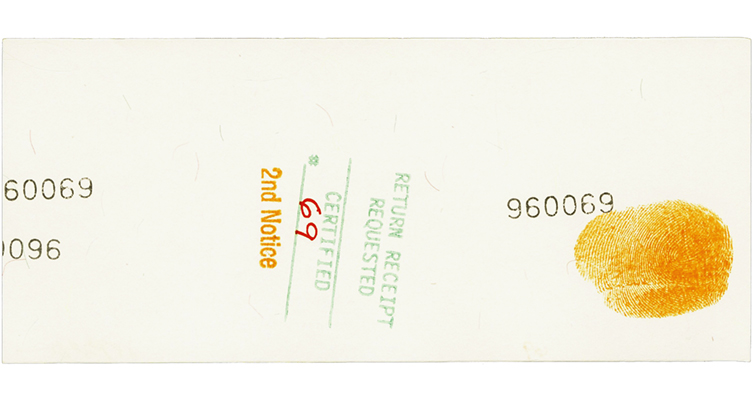 The back has security devices including individual numbering and the artist’s thumbprint. 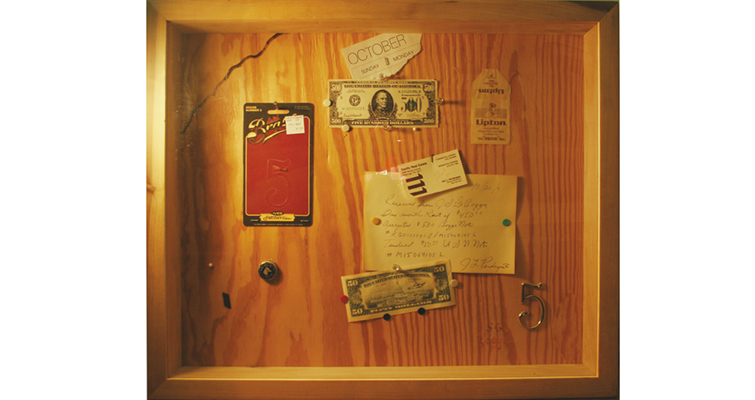 A hand-drawn interpretation of a $500 note by artist J.S.G. Boggs along with supporting material representing a rent transaction sold for $16,100 at auction last year. 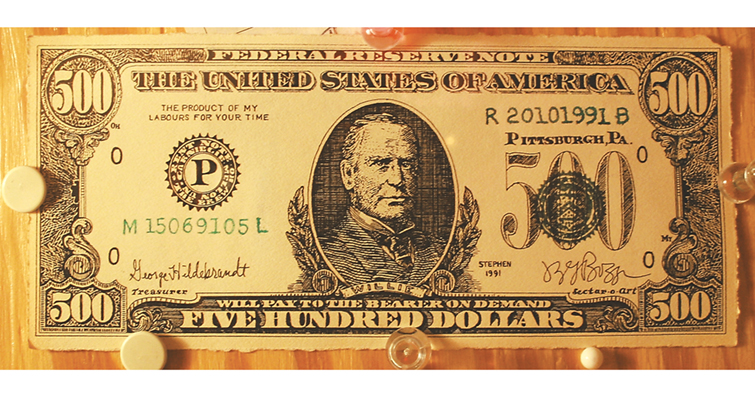 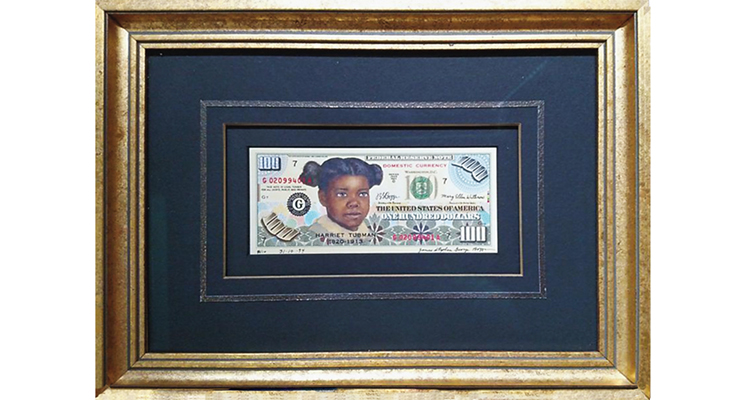 Boggs’s depiction of a young Harriet Tubman on a $100 note preceded the decision to put the famed abolitionist on the $20 bill by two decades. 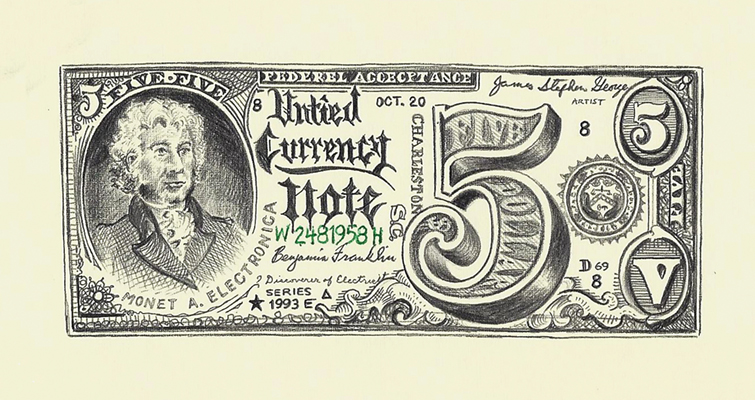 A $5 fantasy note by J.S.G. Boggs has elements used in U.S. currency but depicts a fictitious Monet A. Electronica.

Working both within and outside of the confines of the law, American artist James Stephen George Boggs — better known as J.S.G. Boggs — is an enigma.

His signature pieces are hand-drawn replicas of current money called “Boggs bills” that he uses to purchase goods and services. His work combines visual art and performance art, with his bills and the documentation of the transaction serving as a core element of his artistic practice.

Boggs was born in Woodbury, N.J., in 1955 and rose to fame with his one-man exhibition titled “smart money (HARD CURRENCY)” that traveled the country. He isn’t represented by  traditional galleries and his work generally has to be acquired through a transaction with the artist. This exclusivity adds to his mystique.

He works to question the value of paper money, but in creating these close replicas he has challenged counterfeiting laws in the United States and Great Britain. In a key case that was decided by the U.S. Court of Appeals in the District of Columbia, a judge wrote, “Art is supposed to imitate life, but when the subject matter is money, if it imitates life too closely it becomes counterfeiting.”

At the core of the U.S. legal conflict was “Project Pittsburgh,” where Boggs planned to spend $1 million in his bills in the Pittsburgh area and would ask recipients to pass the bill five times before taking it out of circulation. In November 1992 the Secret Service and U.S. Attorney’s Office decided that the plan could not continue and the Secret Service would soon seize more than 1,300 items from Boggs’s home and studio. He requested that his property be returned and a multi-year legal battle followed.

Boggs challenged the confiscation in court, contending that his bills were protected by the First Amendment of the U.S. Constitution and he challenged the standard used in determining that his bills were counterfeit. The Appeals Court noted that Boggs does not intend to defraud those who are engaging in a transaction with him using Boggs bills, and saw value in the artist’s exploration of the value of money and the social and political institutions that underlie a system of exchange.

However, the Appeals Court agreed with a lower court’s finding that the “Boggs bills” were contraband, defined as objects inherently unlawful to possess, and that they were not entitled to First Amendment protections. A footnote in the dissent summarized the issue elegantly: “Labeling a counterfeit bill ‘art’ will not save it from the Secret Service’s incinerator, but at some point, an artwork’s loose resemblance to currency will not strip it of First Amendment protection.”

Pennsylvania collector Wayne Homren wrote in the May 1994 issue of The Numismatist about his encounter with Boggs as he planned for the artist’s attendance at the October 1993 Pennsylvania Association of Numismatists convention.

Homren wrote that while he had seen Boggs’s photograph, he did not know what to expect nor now Boggs would mix with coin collectors.

At the show, Boggs recounted the story of how he happened upon his unique art, doodling in a restaurant on a napkin the image of a dollar bill. The waitress wanted to buy it, and Boggs offered to pay his 90-cent restaurant bill with his napkin. The waitress completed the transaction when she gave him 10 cents back in change.

Homren noted, “Boggs was not only an interesting artist, he was a comfortable and entertaining speaker as well.”

Boggs gave PAN one of his “Project Pittsburgh” bills depicting a modified Series 1886 $5 silver certificate, where the usual silver dollars depicted on the note have been replaced with five blank round voids. That piece would sell for $350 at the show, and to complete the bill, Boggs pulled out his ink pad and rolled winning bidder Morty Kadushin’s thumbprint on the note.

When asked if the price the note sold for at the auction met the artist’s expectations, Homren recalled Boggs saying, “When it comes right down to it, all transactions are merely an agreement between a willing buyer and a willing seller. Third-party opinions aren’t worth a damn.”

Later Homren would have the opportunity to purchase a $5 fantasy note that takes traditional elements of U.S. currency design and incorporates more personal elements, including a portrait of a man named Monet A. Electronica. The design cleverly weaves in Moneta, goddess of money, Impressionist Claude Monet and Benjamin Franklin and incorporates Boggs’ interest in the future of electronic money. Boggs personalized it by creating a serial number incorporating Homren’s initials. The completed transaction left Homren with questions: Did he offer too much (or too little), why did he buy this particular work of art and how hard is it for an artist to sell his work?

As the collector concluded, these questions don’t have clear answers, and he wrote, “It won’t be just a piece of paper on my wall. It will be a reminder of a pleasant encounter and a trigger for more thoughts and questions on the nature of art, money, history and people.”

Though most of Boggs’s publicity and notoriety came in the 1990s, his work continues to be relevant today and a project from the mid-1990s has come to fruition 20 years later.

An article in the December/January 1995 magazine Worth by Timothy J. Sultan titled “Change for a Hundred” discusses Boggs alongside the government’s redesign of money in the 1990s to incorporate new anti-counterfeiting technologies.

The magazine asked a group of artists to design a note using similar requirements to the Treasury Department’s. As the article concluded, “Along the way, we learned that strict constraints don’t limit a good artist, and that money can be beautiful, provocative, even moving. That’s only fitting. Banknotes aren’t just valuable pieces of paper. They’re national works of art.”

Boggs’s $100 Federal Reserve note depicted Harriet Tubman as a young child. Tubman escaped slavery to become a leading abolitionist and a conductor of the Underground Railroad who was personally responsible for freeing hundreds of slaves. During the Civil War, she served as a nurse, a cook, and a scout who gathered intelligence for the Union cause.

He related the image to her intervention in a slave beating as a young girl, and Boggs commented, “Heroes are always depicted as mature, stately persons. Can a young black girl, or any child, identify with that?” Boggs further suggested different bills for use overseas, where the majority of fake U.S. notes circulate.

On April 20, Treasury Secretary Jack Lew announced that future $5, $10 and $20 notes would feature women in their designs and that the new face on the $20 bill would be Harriet Tubman. The designs of the new Tubman bills are expected to be revealed in 2020 to coincide with the centennial of the Constitution’s 19th Amendment, which gave women the right to vote.

Much of Boggs’s work remains with its original owners and few original Boggs pieces are traded at auction. Among collectors, his notes have traded in excess of $25,000, with perhaps the most valuable being the Tubman notes.

As Homren explains, “It’s the most important one in the series because of the Worth magazine article, which he won an award for (but didn’t want, because it was a commercial art award, not a fine art award). With the Treasury choosing Tubman for the new FRN, this could become his signature work.” Homren added, “Boggs got no mention when the Treasury announced the new Tubman design. Boggs was there 20 years ago, and deserves some credit.”

The framed piece included various components of a rent transaction: a $500 “Boggs bill” with a portrait of William McKinley, named Willie on the note and consistent with the artist’s practice of changing certain details or wording. Also included is the change from the rent payment — a genuine contemporary $50 Federal Reserve note — along with the original receipt signed by the landlord who accepted the bill as Boggs lived in a space called the Brew House in 1991, a brass numeral “5” of the type found on an apartment door, the store package for the numeral, a bottle cap, Lipton tea wrapper, a real estate business card, and a portion of the October calendar for that year.

In the catalog, auctioneer Steven Davis wrote, “This is a wonderful and early ‘Complete Transaction’ performed by the artist,” adding, “Complete Boggs transactions are difficult to come by, let alone one featuring a $500 Boggs bill.”

Serving as an entry point for collectors are the editioned notes that Boggs created in conjunction with the Florida United Numismatist and American Numismatic Association conventions in the mid-1990s.

In typical Boggs fashion, the total “face value” of the 1996 production was $5,000: 200 went to FUN to pay for the artist’s bourse space, 500 went to pay for ad space in Bank Note Reporter (who used the pieces as subscription premiums) and the remaining 300 were sold by Boggs to collectors individually. 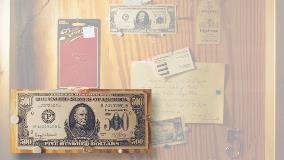