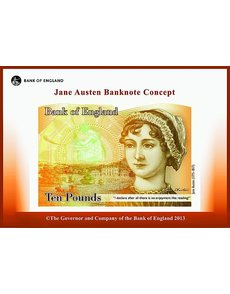 Portrait of British author Jane Austen on the back of the proposed design for the £10 note to be issued in 2017.

A portrait of author Jane Austen and other images related to her will be the focus of a design for the £10 note to be issued in 2017.

On July 24, new Bank of England governor Mark Carney unveiled the design as a tribute to “one of the greatest writers in English literature.”

The unveiling took place at Chawton Cottage where Austen lived the last eight years of her life. The cottage is now Jane Austen’s House Museum, located in the village of Chawton, north of London.

The portrait on the note is taken from a painting commissioned by James Edward Austen, Jane Austen’s nephew, in 1870. It was adapted from an original sketch drawn by Jane’s sister Cassandra Austen.

Austen will be only the third woman — other than Queen Elizabeth II — to appear on British bank notes, following prison reformer Elizabeth Fry, who is being replaced by Winston Churchill on £5 notes in 2016, and nurse Florence Nightingale, who was depicted previously on £10 notes.

The bank faced criticism after announcing in April that Winston Churchill’s portrait will be on the new £5 note. That decision meant that, aside from Queen Elizabeth II, no woman would be depicted on any currently circulating British notes.

Many female members of Parliament joined more than 30,000 people who signed an online petition demanding a woman be depicted on the £10 note. The petition was started by freelance journalist Caroline Criado-Perez, according to a story published in the July 15 issue of the Los Angeles Times. ¦