Is a new golden age in U.S. paper money collecting upon us? 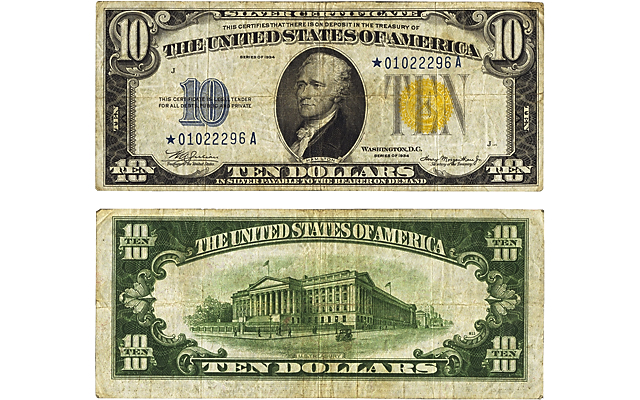 This Series 1934 $10 silver certificate replacement note, F-2308*, is one of four known to be issued for use by U.S. troops in North Africa during World War II.

Are we at the start of a new golden age in U.S. paper money collecting?

The depth and quality of the paper money offerings at the Aug. 5 to 9 American Numismatic Association World’s Fair of Money in Rosemont, Ill., seem to indicate an active and accelerating market.

The ANA named two official auctioneers for this year’s event, Heritage Auctions and Stack’s Bowers Galleries. Between them, millions of dollars’ worth of notes will find new owners within a span of just days.

Stack’s Bowers Galleries expects to offer just under 500 live lots in its ANA sale along with around 200 lots in its Internet session. Their rough estimate for the total sale is around $6 million.

The highlight of the Heritage lots is the first piece of United States paper currency ever issued. It is one of only three known examples of Friedberg 7a (Paper Money of the United States by Arthur L. and Ira A. Friedberg), a serial number 1 Series 1861 $10 demand note.

This note, graded Paper Money Guaranty Very Fine 30, makes its first appearance on the market since 1970 when it was in a Sotheby’s sale.

Another Heritage lot is one of just four known Series 1934 $10 silver certificate replacement or star notes, F-2308*. The silver certificate was among those issued for use by U.S. troops in North Africa during World War II. The note, graded Very Fine 25 by Paper Money Guaranty, is expected to reach the high five figures.

One of Stack’s Bowers headliner lots is the newly discovered Date Back Series 1882 $10 national bank note, F-545a, with the improbable Lyons-Treat signature combination from Hereford, Texas, that we announced two months ago. Its uniqueness mitigates its low grade of Fine 12 Net.