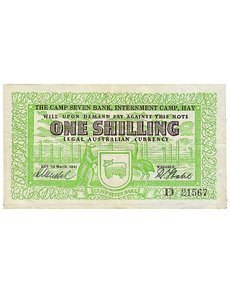 A 1-shilling note from Hay Internment Camp No. 7 in New South Wales, Australia, highlights Downies’ auction No. 309, scheduled for Oct. 25 and 26 in Melbourne.

A paper money rarity highlighting Downies’ Oct. 25 and 26 auction in Melbourne is a remnant of a war-era prison camp in Australia.

The 1-shilling note issued by prisoners at internment Camp 7 at Hay, Western Australia, highlights the firm’s 309th auction. Internment camps, wartime warehouses of “suspect” humanity, were closed societies, and the note was created to fill a need for currency at one camp.

During World War II, in 1940 the British shipped off to Australia 2,542 “enemy aliens” (mostly political internees), aboard a hired military transport ship called the HMS Dunera, according to the 23rd edition of Rennik’s Australian Coin & Banknote Values, edited by Ian Pitt. Some 545 of those internees were dropped off at Melbourne, and the rest proceeded to Sydney where they boarded trains to one of two camps in Hay, New South Wales, according to Rennik’s. More than 900 prisoners, most Jewish, lived at Camp No. 7, including prisoner/artist George A. Teltscher, who designed three different denominations of notes (sixpence, 1-shilling and 2-shilling denominations) for use within the camp.

The notes also carry the message that they were legal tender in Australia, and so “contravened Australian law and their circulation ceased prior to September 1941,” according to Rennik’s.

When the national government closed civilian-owned canteens and began issuing its own internment camp money, notes that had been redeemed were destroyed, leaving only whatever examples people still had in their possession as physical proof of the inmates’ monetary efforts.

Three different signature combinations exist, not counting specimen notes, which are unsigned. The example in the Downies auction bears the signatures of M. Mendel and R. Stahl. In Good-Very Fine condition, the note has an estimate of $12,500 in Australian funds.

The note is one of many highlights among 3,078 lots of Australian and world military medals and militaria, Australian tokens and medals, coins of early Australia, and patterns and fantasies.

In addition, the auction contains predecimal and decimal coins, antiquities, ancient and world coins, and Australian and world paper money including bank notes and scrip.

A complete session of non-numismatic collectibles, including sports cards and memorabilia, post cards, gems, watches and paintings, is also part of the effort.

For more information about the auction or the firm, telephone the firm at (011) 61 38677 8800, email it at auctions@downies.com or visit its website, www.downies.com.

Australia, bronze World War I death plaque, Maj. Stuart Hamilton Rickman (one of the “Old Contemptibles”), 2nd Battalion, the Rifles Brigade, died Aug. 27, 1914, age 42, after being wounded the day before while commanding his brigade in the Cambrai-Le Cateau, 120 millimeters, “rare to a commanding officer and very desirable,” “any death plaques to Old Contemptibles are very collectible,” Lot 122, “adhesive mounting substance on the uniface reverse otherwise EF.”

Australia, 1856/5 gold sovereign, Type I, Sydney Mint, Queen Victoria, “overdates are rare in any Sydney Mint issues, this with a clear and distinct overdate, just a handful known to exist and extremely rare, particularly in this condition,” Lot 689, About EF/EF.

New Zealand, March 2, 1874, National Bank of New Zealand Ltd. £1 note, Dunedin, P-S291e, not listed in Pick as an issued note, “possibly the earliest note from this bank to exist and no doubt the rarest New Zealand banknote we have offered,” Lot 2628, VG.