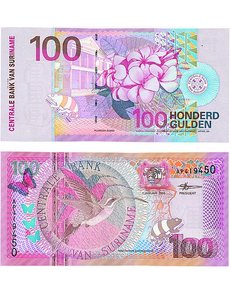 A lizard, a hummingbird and repeated images of butterflies appear on the face of the 2000 100-gulden note of Suriname. The images of the butterflies and the lizard, which can also be seen on the back of the note, are security devices built into the note design.

What’s that bug flitting across the latest addition to your paper money collection?

Look a little closer and you’ll see the insect could actually be a part of the note’s design.

In a field full of vignettes of national leaders and stately government buildings, the idea of insects on legal tender many seem strange. It’s not the first subject that comes to mind when making a list of topics for paper money, but these small creatures have made occasional appearances on circulating cash in recent decades.

Even those who are a bit squeamish about insects can get into this little-known specialty without too many problems, as the roster of insects doesn’t include perennial pests such as cockroaches and bedbugs. It isn’t hard to appreciate the grace of a butterfly, a number of which have appeared on world notes over the years.

These winged wonders make several appearances on the Sri Lankan paper money of 1979. The 2-rupee notes are the most affordable in the series, and it proves that low-denomination notes can score high in artistry and detail. The multicolored (red, rose and brown) notes display a butterfly, and striped lizard, on the back, with a black ruby barb fish on the face. At 75 cents to $6 depending on condition, it’s also a great value for the low-budget collector or person with an eye for small-scale artwork.

Sticking with less expensive paper money, the 5-rupee notes from this series feature the butterfly and lizard duo on the face, with a native songbird and flying squirrel on the other side. Someone high up in the Sri Lankan central bank hierarchy must have been a butterfly specialist, since the 1979 series of 50- and 100-rupee notes also feature these colorful creatures.

The butterfly on the blue and brown 50-rupee notes can be seen flying on the face along with a local bird species. A design featuring lizard and birds occupies the back of the note. Birds share the face of the 100-rupee notes with a snake coiled around a tree, while the butterfly was placed on the lower portion of the back.

Unlike the lower-denomination notes, the Sri Lankan 50- and 100-rupee issues are far more expensive in Crisp Uncirculated than they are in circulated grades, so “used” is the way to go if money is tight.

Other nations also placed vividly hued butterflies on their currency. In addition to being a large denomination issued during a cycle of hyperinflation, Brazil’s 100,000-cruziero notes of 1992 show a butterfly on the right side of the face. A hummingbird feeding its young is the main theme. This attractive item is quite affordable in all grades.

A butterfly shares the back of the Cyprus £10 notes of 1997 to date with Ruppell’s warbler, a green turtle, a mouflon (think mountain goat or ram) and some local vegetation. Since this is the highest denomination Cypriot note (current exchange rate U.S. $24.50), the price is going to be higher than the comfort zone for some thrifty shoppers.

Check out the fancy tropical butterfly on the face of the 1974 Madagascar 500-franc/100-ariary notes. The vignettes include a woman carrying a basket on her head along with local folk dancers. Circulated examples will be easy on the wallet.

The butterfly on the 1986 Mauritius 50-rupee notes appears to be floating though a forest scene shared with two mature deer on the back design.

Moths are usually associated with destroying fabric, so it’s somewhat sur-
prising to see a Danish red ribbon order moth on Denmark’s 100-kronor notes of 1972 to 1992. And look at the Series 2003 200-kronor note from the Faeroe Islands, an isolated Danish territory located north of Scotland and west of Norway.

Warm climates and insects are a natural combination, so it’s not a great surprise to see local insects on Cape Verde’s 1,000-escudo notes of 1989 and 1992. The later series features the Cape Verde warbler on the face.

“Busy as a bee” is a saying that speaks of diligence and an industrious attitude, and bees are an absolutely essential part of agriculture as they pollinate plants and produce honey for human consumption.

A bee is paired with a colorful sunflower on the 50-gulden notes issued by the Netherlands in 1982, and the watermark is bee-shaped as well. Sweden’s 100-kronor notes, issued from 1986 to 2000, shows a bee pollinating a flower along with a honeycomb pattern in the background.

Ships and various animals are well-known specialties in topical currency collecting, but few have searched out the much narrower scope of insects on money. If doing what everyone else does “bugs” you, this could be a way to escape the familiar and routine. ¦