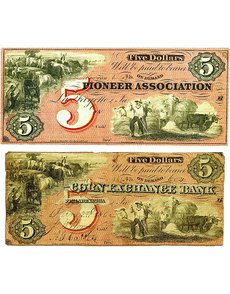 Images courtesy of Wendell Wolka.Shown at top right is an unissued original note from the Pioneer Association in Lafayette, Ind. Below right, is a typical alteration to the Corn Exchange Bank of Philadelphia. Note the white space around philadelphia and that corn exchange bank tilts down to the right.

One of the banes of money handlers in antebellum America was the flood of altered notes. This brand of fraud was facilitated by the fact that thousands of different bank note and scrip designs from almost as many issuers were in circulation at any given point in time. The good, the bad and the downright fanciful often circulated side by side with virtually no available information to help in sorting out the situation.

As a result, some “artisans” would buy up leftover sheets of unissued bank notes from failed banks for the value of the paper, literally pennies on the dollar. This inventory, in turn, gave the note alterer a stock of professionally engraved and printed notes to work on. He then either mechanically or chemically removed all references to the original bank name, state and city of issue. He now had generic bank notes on which he printed a new bank name, city and state with simple little printing plates.

Although such notes bore no resemblance to any genuine issues, no one knew. If the spotlight of negative publicity got too close for comfort, the note alterer simply moved on down the road and picked the next bank he was going to target.

One defunct Indiana bank, the Pioneer Association of Lafayette, Ind., is my candidate for the source of one of Indiana’s leading exports in the decade leading up to the Civil War. More than 100 banks, mostly on the East Coast, were the targets of alterations made from its notes. The $5 note was particularly favored because both the city and state name were inconspicuous and easily removed.

The inscription pioneer association was, on the other hand, prominent and left telltale white space in the red background tint when the letters were erased. Shown are the original $5 note on the Pioneer Association and a typical alteration to the Corn Exchange Bank of Philadelphia. Note the white space around philadelphia and that corn exchange bank isn’t aligned properly; tilting down to the right. Not a perfect job, but probably good enough to pass to someone who was distracted or in a hurry. And that was the goal — something just good enough to pass — once.

Just imagine how many people would be taken today if we had a similar situation rather than a highly standardized currency.