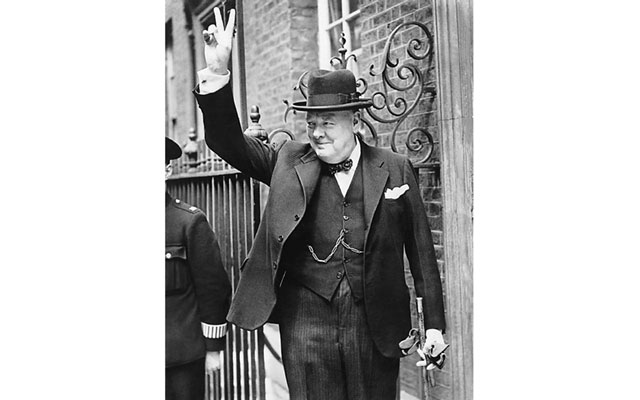 Winston Churchill gives his famous "V" for Victory sign as he walks down Downing Street in London in 1943. 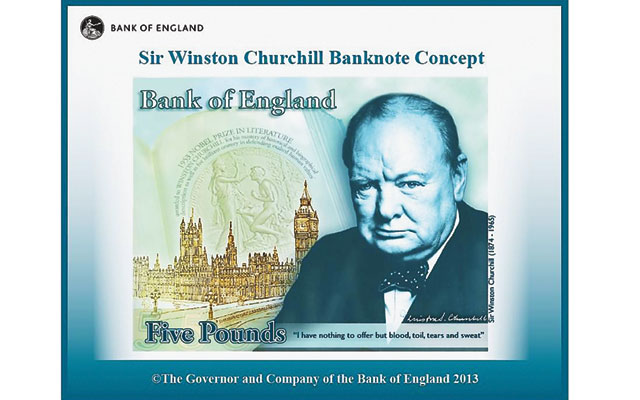 In 2016 the Bank of England will issue its first polymer notes, a £5 note featuring a portrait of Winston Churchill on the back. 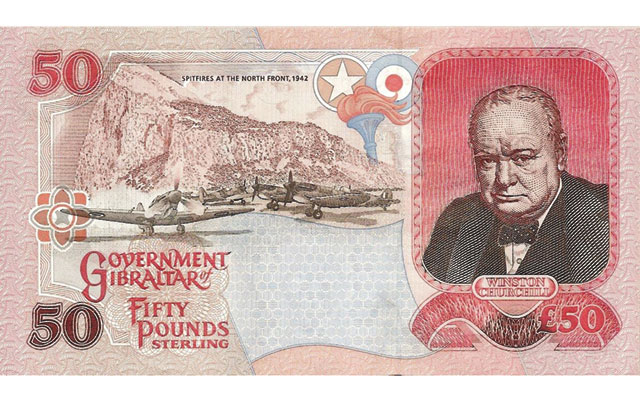 Winston Churchill was honored on the back of the 1994 £50 note issued by the Government of Gibraltar. The face design, not shown, features a portrait of Queen Elizabeth II.

Editor's note: The following is the sixth of a six-part Coin World series about collecting the medals, coins and paper money honoring Winston Churchill, prepared by Michele Orzano for the March 2015 monthly edition of Coin World.

In 1994 the Government of Gibraltar issued a £50 note honoring Churchill. The face design features a portrait of Queen Elizabeth II, with smaller vignettes of the Rock Apes of Gibraltar and a hackney carriage. The back design has a portrait of Winston Churchill to the right and several Spitfire aircraft at Gibraltar’s 1942 Royal Air Force Station, which was known as the North Front during “Operation Torch.”

The operation was the code name for the Allied invasion of North Africa, in which Gibraltar and its new airfield played a vital role.

In 2016, the Bank of England will release a redesigned £5 polymer note honoring Churchill.

The Bank of England unveiled a concept design for the note in late December 2013. A head and shoulder portrait of Churchill, complete with bow tie, is depicted on the right side of the back of the note.

In addition to the portrait, the back design will show a view of the Palace of Westminster and the Elizabeth Tower from the south bank of the Thames River looking across Westminster Bridge. The Elizabeth clock tower may be better known by the name of its main bell, “Big Ben.”

According to the bank, the image of the Elizabeth Tower shows the hands of the Great Clock at 3 o’clock — the approximate time on May 13, 1940, when Churchill declared in a speech to the House of Commons: “I have nothing to offer but blood, toil, tears and sweat.” This text will be printed beneath the portrait.

On March 1, 1955, Churchill made his last great speech in the House of Commons, essentially bidding it and the British people farewell. He was six months shy of his 81st birthday and soon to retire from public life when he said:

The day may dawn when fair play, love for one’s fellow-men, respect for justice and freedom, will enable tormented generations to march forth serene and triumphant from the hideous epoch in which we have to dwell. Meanwhile, never flinch, never weary, never despair.

Perhaps the best way to pay homage to the man and his many years of service to his homeland and the world is to collect one or several of the many numismatic tributes available, particularly those issued in 2015.