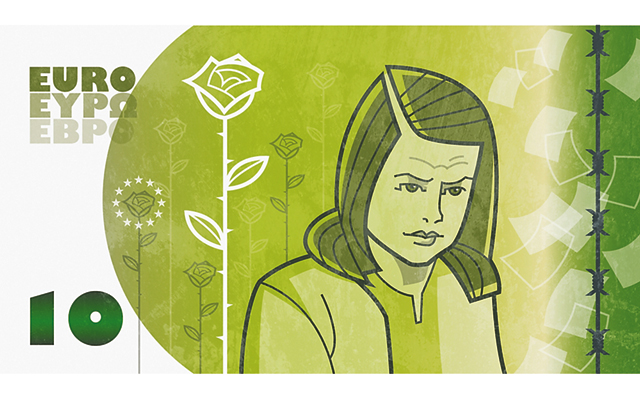 Illustrator Matthias Bender drew a portrait of Sophie Scholl, a German student who actively resisted the Nazi regime. She was executed in 1943.

A group of 28 professional illustrators from around Europe contributed their design ideas for euro notes during a Sept. 23 to Oct. 6 display in Düsseldorf, Germany.

“There’s something emotional about a currency. The colors, transparent elements, faces, holograms and even security features,” said Antje Herzog, creator of the Neuro Illuminated project.

Herzog said when travelers see paper money in other countries they can learn about the people, animals, flora, the history and identity of the country.

The purpose of the Neuro Illuminated project is to stress that euro notes can be more beautiful than they currently are, according to Herzog. The Neuro project is an attempt to stimulate a visual discussion, she said.

As examples, illustrator Thomas Haubold submitted designs displaying early civilizations, and Matthais Bender offered a portrait of Sophie Scholl, a German student who actively resisted the Nazi regime in 1943 and was executed for it. Elke Hanisch’s designs featured a variety of fish with the message PROTECT OUR RIVERS AND SEAS.

The exhibit is being staged at Stilwerk, a premium interior-design retail center in Düsseldorf.

For more information about the Neuro Illuminated project, or to purchase the exhibit catalog or prints of the designs, visit the project website.