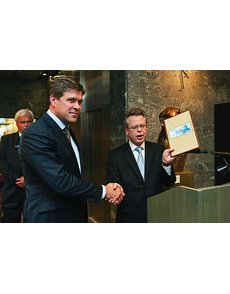 Mar Guomundsson, governor of the Central Bank of Iceland, hands the framed 10,000-krona note with serial number 1 to Bjarni Benediktsson (left), minister of finance, during the Oct. 24 launch ceremony for the newly redesigned note.

Image courtesy of the Central Bank of Iceland.

A vignette of the Icelandic poet Jonas Hallgrimsson, along with a number of references to him and his work, appears on the face of the new 10,000-krona note issued Oct. 24 by the Central Bank of Iceland.

During the ceremony, Mar Guomundsson, governor of the Central Bank of Iceland, handed the serial number 1 10,000-krona note, which was framed, to Bjarni Benediktsson, Iceland’s minister of finance. Bank officials said the framed note will be placed in a museum owned by Iceland.

“Optiks is an 18-millimeter-wide thread with a see-through window. The thread is multi-dimensional, as it incorporates several different security features. It contains a repeating image of a flower and the text 10000 KRONUR which can be seen when the note is held up to the light. The thread [also] contains two fluorescent bands that are visible under ultraviolet light,” according to the bank’s news release.

The Optiks security thread can be seen from the face and back.

The new notes were printed by De La Rue PLc., in the United Kingdom. The firm has printed bank notes for Iceland for 83 years. ¦