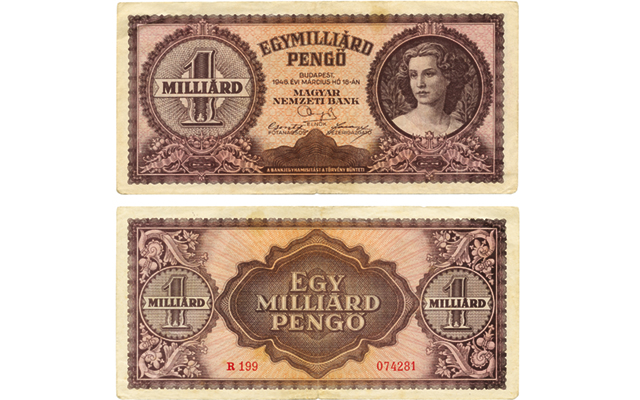 During the hyperinflation period following World War II, the Hungarian National Bank issued high-denomination notes like this one in 1945. The note is not worth lots of money, but the history behind their issuance is fascinating.

I was cleaning out a desk the other day, getting ready to move out of town, and found what looks like foreign paper money.

I know nothing about foreign paper money, if that’s what these are, so I am hoping you can help me.

Can you tell me what these are and if they are worth anything?

The two notes you have were issued by the Hungarian National Bank in 1945. In their fairly worn condition they may be worth a couple of U.S. dollars each.

However, the story these notes tell of a nation grappling with post-World War II finances is a fascinating one.

The 100,000-pengo note depicts a woman wearing the national dress of Hungary.

The 1-milliard-pengo note also depicts an elegantly dressed woman, though no other details are known about who she may be or what she may represent.

The pengo denomination was in use in Hungary from 1927 to 1946 as part of a stabilization program following the end of World War II.

The word “milliard” means a thousand million in parts of Europe. In the United States it would be the equivalent of 1,000,000,000 or a billion.

No matter how it is defined, it is an indication of the ever rising hyper-inflation Hungary and other European countries experienced after World War II.

In fact, lower denomination Hungarian notes such as the 1,000-pengo piece and 10,000-pengo note can often be found with a Hungarian postage stamp attached.

The stamps were an attempt to add value to the notes. But eventually the fragile economics behind the plan made the pengo-denominated notes worthless.