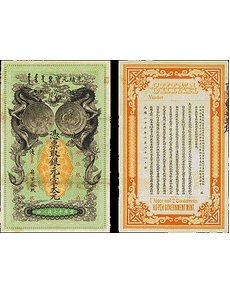 A piece of paper money from Hupeh China featuring Dragon silver dollars highlights Stack’s Bowers and Ponterio’s April 4 auction of paper money in Hong Kong. The note has an estimate of $25.000 to $35,000.

The vertical format 7 mace and 2 candareens paper money (the note also denominated as a dollar) shows facing dragons, holding the obverse and reverse of the Dragon silver dollars, with a pearl of wisdom at the center, on the face of the note.

Unlike many examples of the type, this example does not bear the large cancellation markings.

The note is graded by Paper Money Guaranty as Choice Very Fine 35 (Net Fine), Repaired, and is the highlight of the April 4 Stack’s Bowers and Ponterio auction. The catalog description does not identify the nature of the repairs noted in the PMG grade.

A 19.5 percent buyer’s fee applies to all successful bids.

For more information, write to Stacks Bowers Ponterio at 1063 McGaw Ave., Suite 100, Irvine, CA 92614, telephone the firm at 800-458-4646, email the business at auctions@bowersandmerena.com or visit its website at www.bowersandmerena.com.