Hunger Games salute showing up on Thai notes as protest 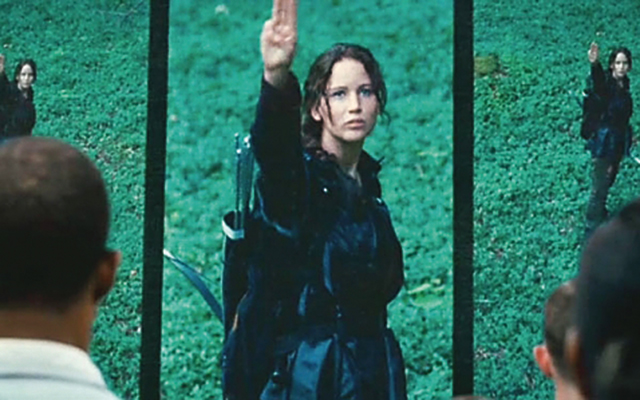 The character Katniss Everdeen from the movie "The Hunger Games" offers a three-finger salute. That gesture has been adopted by some Thai supporters of the anti-coup movement in Thailand. The Bank of Thailand has asked citizens not to draw the gesture on its bank notes.

The Bank of Thailand has called on people not to write on or mark bank notes, according to a story posted June 17 on the Bangkok Post website.

The central bank’s request came after images of bank notes bearing the anti-coup three-finger salute (think the District 12 sign made by the fictional character Katniss Everdeen in The Hunger Games) spread online.

The bank urged people to use bank notes correctly to extend the notes’ viability and save the country’s resources.

Each year, billions of new bank notes are printed, and 80 percent of them are to replace degraded notes, according to the central bank.

The bank advised people who have notes with marks to exchange them for new ones at the Government Savings Bank and commercial banks.

According to a bank spokeswoman, there is no punishment for people who mark or write anything on bank notes. However the central bank seeks cooperation from the public to use notes as intended.

According to a recent posting at the Smithsonian magazine’s website, www.smithsonian.com, the salute from the fictional dystopian world of The Hunger Games has morphed into a way Thai citizens silently protest the recent military coup. Making the gesture officially illegal is apparently under consideration by Thai junta officials, according to the Smithsonian post.