How Continental Currency became worthless in the 1770s 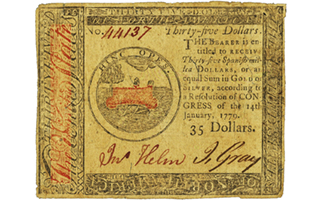 This $35 Continental Currency note, issued under the Jan. 14, 1779, resolution by the Continental Congress, was the target of British counterfeiting aimed at destabilizing the currency.

By the summer of 1779 the slogan of “Not Worth A Continental” was born when something had no value. How did it get this far?

The Articles of Confederation, the governing law at that time, gave the government no power to tax. The government had to rely on contributions from each state. As one man said, why did they need the power to tax when they could get all the money they needed from a Philadelphia printing press? So they did just that.

This was not the only reason though. The British were operating a counterfeiting ring with the intent of destabilizing Continental Currency and the young government.

Late in 1776, the last royal governor of New York, William Tyron, had a counterfeiting operation aboard the Duchess of Gordon; however, the shipboard operation used paper that was thicker than the real Continental Currency so there was a notable difference.

The paper used for the Continental Currency was produced by the Ivy Mills in Chester, Pa. It had mica flakes and blue fibers.

During 1778 and 1779 the British were counterfeiting Continental Currency and using conduits to circulate the fake notes. Two such men, John Blair and David Farnsworth of New Hampshire, were caught in Danbury, Conn., on Oct. 7, 1778, with $10,007 in Continental Currency. Because the men were known Tories and by the large amount of extremely good counterfeit dollars they had with them, an effort was made to secure a confession and to find out where they got the notes. It turned out that both men were in the employ of British intelligence.

A little later, one of Washington’s spies, Robert Townsend (known as Culper Jr.), who was acting as a Loyalist, discovered that the British had a counterfeiting operation in New York. This was discovered by having conversations with various British officers and officials in Rivington’s Coffee Shop. Townsend used invisible ink (supplied by Washington) to notify Washington of the plot. Townsend would write a letter of average correspondence and then between the lines used the invisible ink that Washington could read when he used a chemical on the paper.

About the same time, the British ship Glencairn was captured by the American frigate Deane. A sailor aboard the Deane noticed a wood crate being thrown overboard and fished it out of the water. In the crate were materials for counterfeiting Continental Currency.

Washington, in a lengthy letter to Congress, warned members of the danger, and on March 18, 1780, Congress was forced to recall all of its bills in circulation, effectively declaring bankruptcy to save itself.