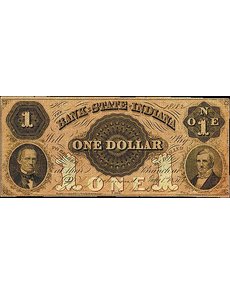 The Bank of the State of Indiana, the entity that issued this $1 obsolete note, was capably and conservatively run, but its history is anything but boring.

History will show that the Bank of the State of Indiana was capably and conservatively run and that it navigated the perilous time period between its opening in 1857 and 1865 without the loss of a single cent by note holders.

The bank’s 20 branches mostly continued, to become national banks during the course of 1864 and 1865, when the bank decided to voluntarily wrap up its affairs slightly in advance of its original charter expiration date.

But the bank’s organization in 1855 was anything but boring. A little history is in order to help explain what went down.

The predecessor State Bank of Indiana, which had been in business since 1834, was starting the slow process of winding up its affairs so that it could close in an orderly fashion when its charter expired Jan. 1, 1859.

Three plus years seems like a long time, but loans had to be wrapped up and circulation recalled in an orderly fashion. Independently organized “free banks,” which had been authorized beginning in 1852, had largely not survived the Panic of 1854, with many failing in late 1854 and early 1855.

The State Bank had successfully ridden out the Panic of 1837, the Mexican War and the Panic of 1854, but state ownership of a large bank was out of favor politically and so promoters for a replacement institution took another tack.

They hatched a scheme to get a new “Bank of the State of Indiana” chartered by the legislature. In spite of its name, the bank was to be owned not by the state but wholly by its stockholders.

The new bank stock promised to be quite lucrative and the promoters offered rights to purchase stock to anyone they felt could aid in “greasing the skids” in the legislature to procure a new charter.

By one means or another, they managed to secure enough votes to get the bill passed over the governor’s veto on March 3, 1855.

The next task at hand was to open the subscription books at new branch locations around the state. The promoters, of course, had to make sure that the “right people” were allowed to subscribe for the available stock and a number of subterfuges were employed.

The most imaginative approach was employed in Richmond, Ind., where a sub-commissioner’s train was held for 15 minutes so that he could complete the task of opening the subscription books and get out of town almost without breaking stride! The books had probably been open for five minutes, with the “approved list” of stockholders inserted in a matter of moments.

The promoters were long on planning but short on money and agreed to sell 17 of the 20 branches to men associated with the old State Bank of Indiana in 1856.

Under the able leadership of these time-proven bankers, the new bank’s future was finally assured.