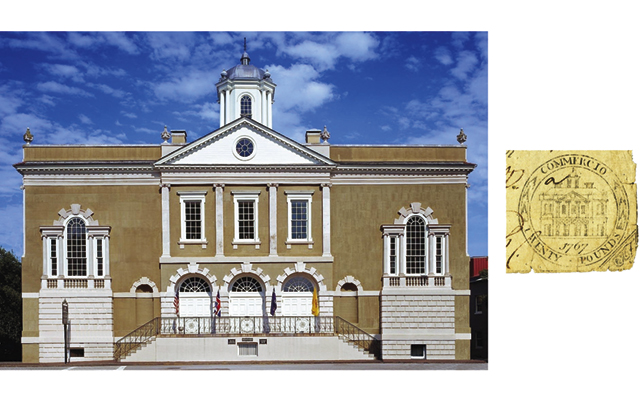 The Exchange and Customs House rendered as a vignette on a 1767-dated South Carolina £20 Colonial note still stands today, right, in Charleston.

Growing up in Pennsylvania, I spent a lot of time around old buildings. Most were not famous structures, just local homes, barns, springhouses, and other outbuildings that were constructed in the 18th century and hadn’t bothered to fall down. Styles ran the gamut.

Just like almost everything else in early America, reflections of our early architectural heritage can be found still today in the coins, medals, and paper money we collect.

Perhaps the earliest American structure depicted on a numismatic object was the old Gloucester courthouse in Gloucester, Va., depicted on the extremely rare 1714 Gloucester tokens.

Just two are known, neither in very nice condition, but both clearly depict a now-long-gone Virginia Tidewater structure. The current courthouse is rather new by the standards of the area, having been built in 1766.

The brand new Park Theatre graced an English-struck token collected today as the “Theatre at New York” token. The token is dated 1797, before the new Park Theatre made its debut in January 1798. That building is also long gone, rebuilt after a fire in 1820, leaving its appearance quite different, then gone entirely after 1848. Today, an electronics store sits on its site.

Paper money offers a wealth of examples, though few of the structures survive: the Savannah Courthouse and Fort George in Georgia, Fort Johnson in North Carolina, the Cape Henlopen Lighthouse and Walnut Street Workhouse on issues of Pennsylvania, and the Exchange and Customs House in South Carolina, among others. Of these, just the last is still standing in its original form, easily recognizable and a major tourist attraction in Charleston.

While plenty of Colonial structures appear on early American medals, most depictions are inaccurate, even totally fictional.

Among the most notable exceptions are the images of Havana’s Morro Castle on the 1763 medal celebrating its destruction; Cliveden, the home of Benjamin Chew, found on the 1777-dated Battle of Germantown medal; and the First Bank of the United States on the 1795-dated Alexander Hamilton medal struck at the Philadelphia Mint.

Each of these medals depicts a structure based upon a careful eyewitness view. In the case of the last medal, engraver Moritz Furst likely walked by the First Bank often; it was just five or six blocks from the first U.S. Mint on Third Street, where it remains even today.