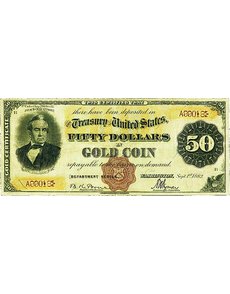 This Series 1882 $50 gold certificate, one of only five known, will be offered at the Heritage Signature Currency Auction Sept. 7 to 10 during the Long Beach Coin, Stamp and Collectibles Expo in Long Beach, Calif.

One of only five known examples of a Series 1882 $50 gold certificate will be offered at the Heritage Long Beach Signature Currency Auction during the Sept. 7 to 11 Long Beach Coin, Stamp and Collectibles Expo in Long Beach, Calif.

The note, cataloged as Friedberg 1190 in Paper Money of the United States by Arthur L. Friedberg and Ira S. Friedberg, was graded by PCGS Currency as Fine 15.

The note is described by the cataloger as “well margined and evenly circulated.” All known examples are circulated. The note bears the facsimile signatures of Register of the Treasury B.K. Bruce and Treasurer of the United States A.U. Wyman. The note includes the text, “there have been deposited in the Treasury of the United States Fifty Dollars in Gold Coin repayable to the bearer on demand.”

The Series 1882 gold certificates “were the first to include the $50 denomination. The design of the note includes a portrait of Silas Wright, Jr. on the face. The engraver of the portrait was Charles Burt and his work was based on a painting by Alonzo Chappell,” according to Heritage paper money cataloger Kathy Lawrence. The consignment deadline for this auction is July 23.