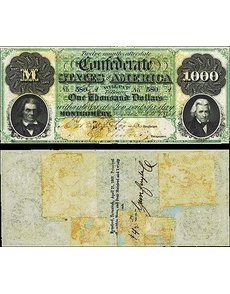 This 1861 $1,000 Confederate States of America note is one of two examples that will be offered in the Heritage Signature Currency Auction during the Florida United Numismatists Convention in Orlando, Fla., Jan. 5 to 10.

More than 6,700 lots of U.S. and world notes will be offered by Heritage Auctions during its Jan. 5 to 10 Signature Currency Auction conducted in conjunction with the Florida United Numismatists convention at the Orange County Convention Center in Orlando.

Among the notes offered will be the Honorable William H. Kelly Collection of Confederate Notes and Southern Obsoletes. The consignment includes eight “Montgomery” notes, so named because they were issued in Montgomery, Ala., when the city was the first capital of the Confederacy. Two examples each of 1861 $50, $100, $500 and $1,000 CSA notes will be offered. All eight of those notes were graded by PCGS Currency.

The Roger H. Durand Santa Claus Notes Collection will also be offered during the second session of the auction.